I haven't done many gear reviews, but in this instance I feel compelled to do one, since this product will change my adventures.

One of the things that I've always felt that was missing from the market, and therefore from my bag of toys was a snowski... an alternate to a snowshoe.  Don't get me wrong, I love snowshoeing, but sometimes a better option (in my mind), would be a short ski.  Backcountry skiing is my number one passion, but there's been something missing from my quiver of backcountry skis.   Conventional backcountry skis are long and require the addition of climbing skins to be effective on the uphill portion.  Skins take time to put on the skis and they really slow you down on the downhill.  The real pain is when you get to rolling terrain or thicker woods.  It's not practical to take the skins on and off frequently and conventional length skis can be too long once off-trail.

Hence the snow ski... snowshoe alternate.  I'm surprised there are not more options on the market for such a product.  I didn't even know there were any options until recently.  There is a company called Alkai that makes a snow ski called the Alkai Hok.  It is available in two lengths, 125 cm and 145 cm.  The shorter one is meant to be more of the substitute for a snowshoe, and the longer one functions a little more like a ski.  The longer length gives more speed, but the trade-off is the added length takes away mobility off-trail.

The company also offers two binding setups; a "universal" binding which is almost like a snowboard binding and can take and boot,  a conventional heavy duty 3 pin telemark binding.  Of course you can mount whatever binding you like if you chose.

The universal binding gives less control, but you don't need special boots.  This is the version my wife Leesa opted for.  I wanted the additional control to do tele turns, so I got the 3 pin setup.  My bought the gear at The Mountaineer in Keene, NY.   They are super helpful there, plus you can rent the Alkai Hoks there if you want to try them out before you buy.  We did exactly that.  The Mountaineer recommended the shorter 125 cm ski for our purposes, snowshoe substitute, so we both bought the shorter version.   The ski is about 4.75 inches wide or 120 mm, which gives a nice stable platform for deeper powder.

The hoks, have a built-in permanent kicker skin that covers the middle half of the ski.  It works fantastic.  I found that it gives exceptional climbing ability, yet there is still some glide left on the ski, which is what I wanted.

Today I got my first chance to check out the performance of the skis in substantial new powder.  A storm 2 days ago dropped 12-18 inches of snow in the nearby Green Mountains of Vermont, so I wasted no time in getting to Manchester Vermont today.  Manchester itself had no new snow, but as soon as I continued east on Route 30 towards Bromley Ski area, that changed quickly.  I parked in the pull off lot where the Appalachian Trail/Long Trail crosses Route 30.  The elevation there is 1800', which is 1000' higher than town.   There was plenty of snow right from the start.  I opted to climb first, thereby heading north towards Bromley Mountain and the Bromley Mountain shelter. 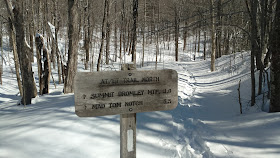 I knew there was going to be one issue during the day... the temperature transition from below freezing to 40+ degrees.  I started at about 10:30 and it was close to 30 degrees.  I brought some Swix F4 wax with me, but didn't know if it would solve the expected problem of snow sticking to the skis. 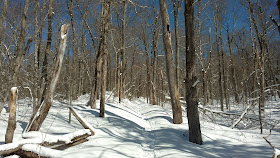 Within about 30 minutes, I had my answer... No.  The skis had glided wonderfully in the beginning , and I was skiing on on a recent snowshoe track.  About the time the snowshoer had turned around, leaving me with virgin snow, the temperature was right where I didn't want it to be.  Snow began to stick to the skis.  I was skiing in a foot of new powder, and with each step, the snow compressed and stuck to the skis.  I took them off and put on some F4, witch worked for 10 minutes or so, and then the snow was sticking again.  I knew it wouldn't be a problem on the downhill, and/or when the temperature climbed another 5 degrees.  This would be a problem with any ski,  so no discredit to the Alkai Hoks.  They were climbing beautifully. 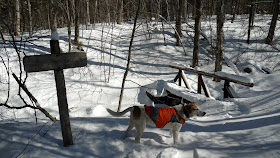 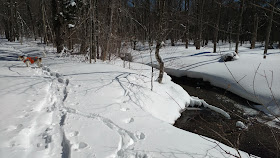 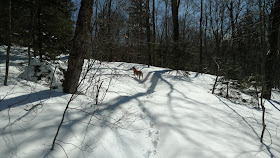 After 2 miles I reached the Bromley Shelter, which was my destination.  I stopped there for lunch and put some more F4 wax on the skis.  Now it was time to go downhill.  It was fantastic.  Since I was gliding and not climbing, the snow didn't stick any longer.  The 2 mile decent was quick and the skis performed as well as I had hoped.  Great control, plus I was happy with the amount of speed I could get with such a short ski and had a climbing skin built into it.  I was stoked! 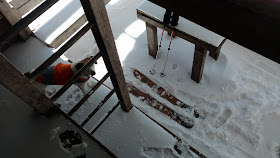 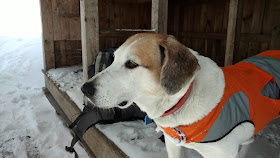 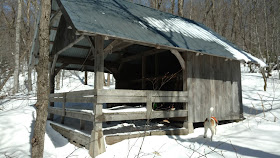 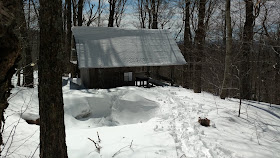 At the bottom I crossed Route 30 and headed south on the trail to get in a few more miles of skiing.  The snow was now warm enough that it was no longer sticking.  It was a beautiful afternoon.


As far as the gear review, I can't say enough about these skis.  They are exactly what I was looking for.  I willing be getting a lot of use out of them in the coming years.  They have metal edges also so you can carve turns.  The picture below shows my skis on the left and Leesa's on the right with the universal binding. 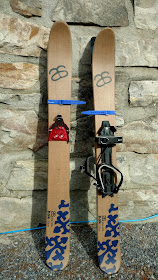 Here is a link to a review that is on the Adirondack Mountain Club (ADK) website.  They give the skis a more in-depth review than I did.  All I can say is the snowski snowshoe alternative has been lacking in the market and the Alkai Hok nicely fulfills that niche.  Try them out if you can!  You can also Google to see other reviews and some YouTube videos.  I'm a happy skier today.