I climbed this peak almost exactly one year ago (4/8/18 v. 4/13/19).  I didn't realize the 1st time that there was a plane wreck located near the summit.  It wasn't until I was on the summit ridge and saw a piece of the plane that someone had placed in a tree that I knew to look for it.  The snow was a little deeper last year, so I didn't drop off the summit ridge to look for it.

I had wanted to come back last fall, but it didn't work out, so yesterday was the day for a return visit.  My wife Leesa came along with me.  It was a beautiful sunny day with temperatures approaching 70 degrees.

To my surprise, no one was parked at the trailhead when we arrived.  There trail begins at the end of Nichols Hill Road in Dorset, and there is a parking lot there.


Although I call it a trailhead, there is no marked hiking trail.  Last time I followed the primary jeep road all the way to the summit .   It makes a large backwards "C" in following it to the summit.  Yesterday we followed an older logging road that climbed more directly up the flank to the ridge.  Once on the ridge we followed the same jeep trail as last year.


The snow was pretty persistent once we were on the ridge.  Old snowmobile tracks were still frozen in the snow so we wore microspikes at that point.


There is one viewpoint that is located close to the true summit.  Someone had cut some trees on the slope to provide this view.

The primary purpose of the return visit was to find the plane wreck.  I had not seen any pictures or information on the internet, other than a statement that it crashed near the summit on the NE slope.  We returned to the place where the piece of the plane was hung in the tree.  This was perhaps 0.1 miles SE of the true summit, but still on the ridge.  I dropped over the NE ridge and found some pink flagging that led a mere couple hundred yards to the plane.  I was in wet knee deep snow at this point.


I'm told that the plane was a Piper Aztec 6 seat plane, but that only two persons were in the plane when it crashed.  Neither person survived. 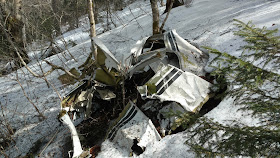 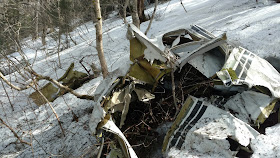 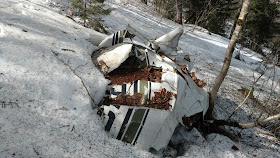 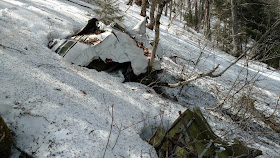 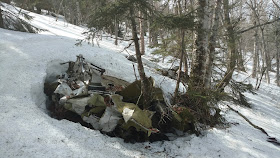 I was glad that the plane was near the ridge, especially since there was deep wet snow on the slope.

We had our lunch up at the summit viewpoint, then came down following another old logging road.  This gave us a nice loop hike.  If you look at the route below, we went counterclockwise.

This area would be pretty in the fall.  I still aim to come back again someone and see the area in a different season.  If you go, bring a compass and GPS if you use one.  As I said, there is no marked trail and there are several old logging roads that can be confusing.