My idea for a first hike in the new year was to find something new that I hadn't climbed before.  I pulled out my map and studied it for a bit and my eyes settled on the Wilcox Lake Wild Forest.  I haven't done much exploring there so I had lot of possibilities.  I decided to drive up past Stony Creek to Lens Lake Road and see if there was a place to park to hike one of the surrounding peaks.

The road was plowed past Lens Lake and almost to Middle Flow.  There was a parking lot at that location and the State Land boundary was right there.  I studied the map and opted to head for Seneca Mountain first.

The followed the unplowed road until I reached the private property boundary.  I skirted left to stay on state land.  The woods were open hardwoods and a the bushwhack was easy.  It really wasn't much of a climb to reach the summit, perhaps 500-600' vertical.   Just as I was reaching the true summit, a large snowshoe hare leapt out from behind a rock and bounded off.  Rev took off in hot pursuit.   The hare quickly disappeared and Rev came trotting back.


I took a hot chocolate break and then opted to head for Spruce Mountain.   Rev and I bounded down the mountain until we reached Paul Creek.  The creek was larger than I expected and there was no way for us to cross and keep our feet dry.  We followed the creek a bit and then headed back towards the car.  At Middle Flow, I found a nice warm spot in the sun and took a break, soaking up some rays.  It felt so good I lingered for a bit.

While basking in the sun, I took another look at the map and determined I could climb Spruce Mountain by starting at the car and hiking straight East.  Paul Creek was no longer a factor.

Five minutes into this 2nd hike, I came to a small creek and saw a cairn in the water.  Looking around, I saw small orange paint blazes on the trees.  Someone had illegally cleared and marked a trail. Shortly afterwards, I saw a sign pointing back to the parking lot.

The orange blaze trail turned northward briefly before turning back eastward.  No doubt this trail was going to the summit.  Next I came to a junction... orange blaze and red blaze.  The orange continued eastward and upward, the red blaze were heading south traversing the slope of Spruce Mountain.

I continued along the orange blaze path and soon reached a prominent viewpoint where I could see Lens Lake, Middle Flow, Livingston Lake and Great Sacandaga Lake. 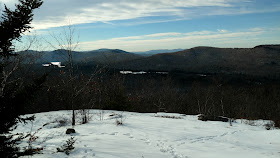 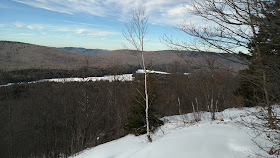 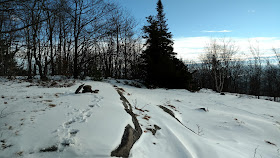 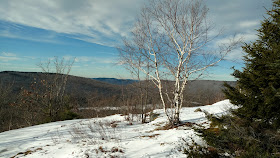 Supplementing the orange blazes were cairns placed along the way.  The trail was not only blazed, but trees had been cut and trees had been de-limbed.  Someone had spent quite a bit of time making this trail.

The illegal trail did not end at the summit, it continued northward down the north flank and towards  the unnamed peak a mile north of Spruce.  We followed the trail and ended up on the summit of the northern peak.

Rather than return the way we came, we side-hilled he west slope of Spruce Mountain until we regained the orange blaze trail down low, not too far from the car.