My list of places to hike isn't getting any shorter, but Bloody and Hail mountains had been on my list for awhile, so when I saw Spencer was heading that way for a nice Saturday outing, I signed on.  Leesa & Rev were game as well, so we joined Spencer (and dog Abby), Jim and Cordell for an 8 AM start.  Since winter was still non-existent, we didn't even pack our snowshoes.

We all met at the former Frontier Town and everyone was on time so we scurried right over to the trailhead Ensign Pond Road (off of Route 9) in North Hudson.  As expected, the trail was icy and we all put on our microspikes right at the start.

Rev set the pace and off we went.  We quickly passed Hammond Pond and reached a location where the trail crosses Black Brook.  Unfortunately, there was no foot bridge and the water was too high to rock hop so we had to search out an alternate location to ford the brook.

We didn't have to create a bridge, but used some downed trees to make our way across.  One minor mishap and we continued on our way.  Next we had to find the supposed trail to Bloody Pond.  I had been on is a few years back, and it had resembled a herd path at that time.  The key is that the trail follows the east side of the Bloody Pond outlet.  With a little snow on the ground, it was not apparent, but we knew where to look and we were able to follow it with little difficulty.  There are some faint yellow blazes on the trees at times.

At Bloody Pond we could see our 1first objective, Bloody Mountain looming behind the pond.  We were ready.  We skirted around the pond on the east side and began climbing in earnest.  Leesa and I kept pulling our microspikes on and off as we crossed areas of ice and bare ground.  Going up the south face of Bloody Mountain we were treated to the unusual circumstance of bare ground in February.  This winter hasn't been pleasing to most people doing outdoor activities, but it's been great for bushwhacking; not being encumbered by three feet of snow on the ground.

It wasn't long in the climb before open rock began to appear combined with views of the surroundings and even high peaks to the NW.   I can't count how many times we stopped to look around and take pictures.

At the summit of Bloody Mountain, we were wondering what Hail Mountain could do for an encore.  We joked that the Hail Ridge would have to be comparable to the Jay Ridge. 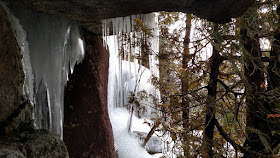 As we began to get views of the true summit of Hail, it was obvious early on that the summit was open and it was indeed raising comparisons to Jay.  Our whole group was really enjoying this hike. We counted seven false summits, but there was no discouragement because each was impressive.

Finally we reached the true summit around 2 PM.  We wandered, stood in awe, wandered and just couldn't believe our good fortune.  Additionally the sun had come out, it was in the 40's and there was very little wind.  We would have liked to explore on this large summit and it's various ridgelines but at 2:30 we pushed ourselves away, knowing that we had around 5 miles left in our hike.   Below are a few more pictures from the summit area. 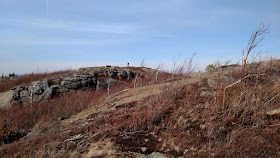 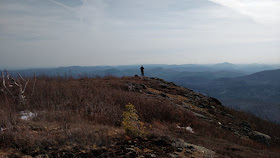 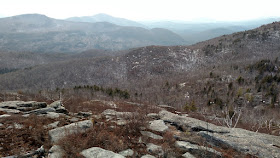 It's good that we left when we did.  As soon as we started down, Cordell stared having leg cramps. Our consensus was that he was dehydrated.  We now made sure that he was continuing to drink liquids, but we knew it would take some time to recover.  He took some Advil as well and we encouraged him to continue to move.


We moved slowly.  Cordell was wincing in obvious pain.  We started down a trough until we hit a lower ridge that offered some easier walking.


As we reached the bottom of the descent near Black Brook Ponds, Cordell was feeling better, but it was now getting dark.


We got across Black Brook, but there was no trail yet on the south side of Black Brook Pond.  We bushwhacked with headlamps until we got back to the trail.  This was about 7 PM.  The remaining walk back on the trail was no problem except for a cautious recross of the logs we used to get across the first crossing of Black Brook.

We signed out at 7:40, thankful Cordell was feeling better and thankful for the glorious day we had in the mountains.  I think Hail Mountain might now be my favorite sub-3000' Adirondack Peak.