On Saturday we chose a new way to visit an old friend.  Cascade Mountain in the High Peaks Wilderness is the easiest of the 46 High Peaks to summit if you take the trail from Route 73.  You can also climb from Marcy Field by summiting Porter Mountain first, then continuing on to Cascade.  A third trail option is to start from the Garden and climb Little Porter to Porter, then to Cascade.

We've done all those routes in the past, and they're all great routes.  I've also climbed from Cascade Lakes via the falls and the slide.  It was now time for a new route.  Leesa and I decided to start at Owls Head and climb Cascade via Laramore Mountain.  I did the research and determined that we could do this hike entirely on state land if we swung east around the base of Laramore.

We started by climbing Owls Head, which is a delightful peak with a great bang for the buck.  If you haven't taken the time to stop and try it, you're missing out.  The trail only has 500' of vertical gain, but the mountain is packed with interesting features and views.

On this day the day was solid ice so I had Leesa forego her microspikes in favor of using my Kahtoola K10 hiking crampons which offer a lot better traction.   With those on her feet, we easily negotiated the ice.

From the top of Owls Head I was able to get a good visual of our climbing line up the mountain (see red lines on the picture below.

As can be seen in the picture, we would be in the hardwoods for the first half of the hike.


Even though it was only 10 degrees, the sun was strong and we had our jackets off by the time we summited Owl's Head.

To continue our journey, we had to descend Owl's Head all the way to the first bend in the trail.  We then wrapped around the southern base of Owl's Head to stay north of private property.   We may have clipped private property when we saw the sign below, but the only posted signs we saw were off to our right (south).  We worked eastward until we passed the private property on the south side, then we were able to climb diagonally in a southwesterly direction before heading due west to gain the ridge.


As expected, the woods were open hardwoods and presented no obstacles except the massive rock formation below, which was easy to skirt around. 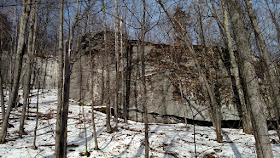 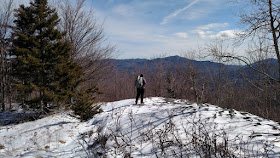 At about 2600' the woods transitioned to conifers and the steepest thickest part of the hike was between 2600' and 3400'.  It wasn't bad in my mind.  Leesa was expecting it to be easier.


As we got above 3400', the grade lessened slightly and the woods opened up a little bit.  We had snowshoes strapped to our packs but they never left our packs.  The snow depth wasn't that deep and it was really firm.

As expected, when we topped out on open rock near the summit, we could see a crowd ahead of us. We leashed Rev and walked to the true summit.  Most hikers were wearing full crampons and they told us the trail was quite treacherous and the crampons were almost a necessity.  We were glad to be in the forest and able to avoid that scenario.  Everyone asked us how we were able to climb that icy trail with the dog, and we said we didn't! 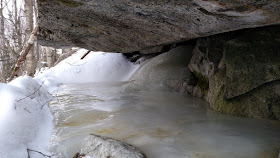 Leesa had struggled a little bit on the climb through the coniferous portion of the hike.  It took us 4.5 hours to reach Cascade.  Going back was a different story.  We retraced our track and were able to exit in 2 hours 45 minutes.  We both agreed that it had been an enjoyable day.  It stayed just below freezing so the snow never got soft.