Our first stop on this surprisingly blue sky day was Good Luck Cliff Mountain.  This is a great short 2 mile hike to some impressive cliffs.  At the base of the cliffs are lots of little talus caves to explore and other nooks and crannies.

This area lies in the large Ferris Lake Wild Forest.  We haven't done much down in this direction (which means future trips in this area will be forthcoming).  We parked at the designated parking area on Route 10 and headed into the woods at the late hour of 10:45.  It turned out to be a really pleasant day.  We had been braced for much worse after reading the forecast so we were in for a pleasant surprise.

The only unfortunate event was I accidently deleted all the pictures off my camera when I got home so all I have is the pictures I took on my cell phone.  The trail is a snowmobile route until the turnoff for the cliffs.  This made for a hard and firm surface upon which we made quick progress traveling the 1.4 miles to the junction with the foot trail.  We lingered at a campsite one mile in form Route 10.  Someone had left a nice pile of cut. stacked wood.  Perhaps they intend to return in the near future.

Once on the foot trail, it is a short moderately steep climb in which the trail wraps around the cliffs then goes up the mountain from the north.   We enjoyed nosing around the base of the cliffs on the way up.


We arrived at the summit and were hit with a pretty good wind from the west that quickly cooled us down.


From the cliff, we went over to the eastern summit of Good Luck Mountain.  The mountain has a double summit.  The western summit is visible from the cliff.  There was no real open view from the summit, but filtered views through the trees weren't bad with the leaves down.

On the way down, we were treated to bluebird skies behind the cliffs, making for nice pictures of the cliffs.  These cliffs are about 500 feet high and are quite impressive. 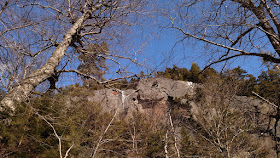 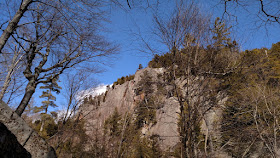 Back at the snowmobile trail, we followed it around to the SE shore of Good Luck Lake before returning to the car.

Our next stop along Route 10 was Kane Mountain.  We parked on road alongside Green Pond and took the steeper East Trail 0.6 miles to the summit.  Skies were still partly sunny and the wind wasn't too bad up on the summit.  I don't have any pictures of the tower or the fire observer's cabin, as they were all on the camera.  I only have cell phone pictures from the tower.

The tower is in very good condition.  the foot treads, railings and wire fencing are all in place and secure.  Additionally the cab is open where you can see (in addition to West Canada Lake) Pine Lake and other lakes.  We didn't see anyone on the Kane Mountain trails until we got back to the car. 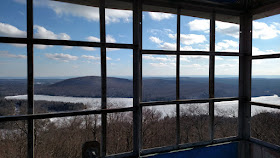 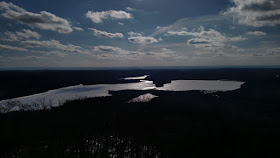 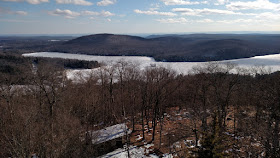 We took the north trail down to create a loop hike with a total distance of about 2 miles.