Oh my god, what an awesome place this is.  The Blueberry Hill Trail System in Elizabethtown continues to amaze me.  I was here almost exactly one year ago for the first time and I wrote a blog report saying how nice this area is.

Leesa and I came back on Saturday to explore "Hill 617" in the NW corner of the property.  We also wanted to walk more of the trail system.  617 is the metric elevation which would convert to 2024'. Satellite images showed lots of rock on the summit.

There are 2 entrances to the trails.  We drove in the Bronson Road entrance and parked at the second sand pit.  The road continues beyond that, but it gets a little rougher.

With the leaves down, we could see hill 617 as we were driving in.  Once we parked, the hill was almost due north from our car and only 1.2 miles distant.  Rumor has it that there will be a trail up this hill, but there is not one there yet.

We followed the woods road and trails until it was time to climb.  Upward we went through the open understory, enjoying the woods and the filtered views west and south.  Soon we came to the false summit on the SE side.

The SE knob is a great spot with lots of views.  It would be tough to beat, but we continued on towards the true summit and found that the summit couldn't beat the false summit.  We pressed on to get to the west end of the summit cone to see what views we meet find there.  This is where we hit the bonanza!  The western tip of Hill 617 is one of the most amazing places I've seen in the Adirondacks. Not only are there great views, but the terrain on the ground is fascinating.  There is a double cleft of rock, plus multiple tiers,  Wonderful trees, grasses, mosses and sandy gravel completed the picture. Below is a sample of pictures from this glorious spot. 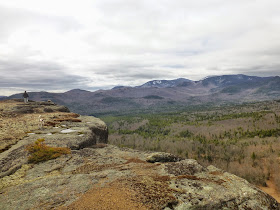 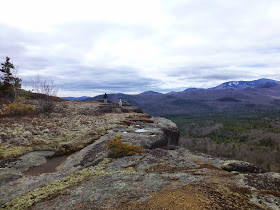 It was windy, cold and gray when we reached the western edge of the hill, but our timing was perfect. Blue skies were rolling in and suddenly it felt a lot warmer. 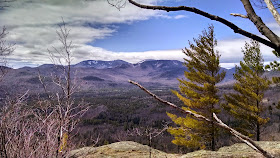 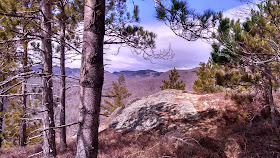 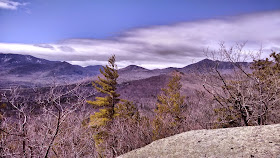 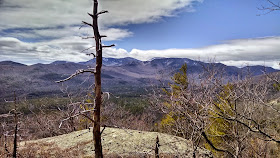 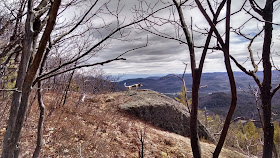 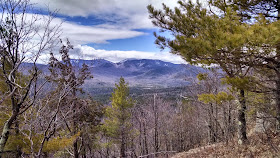 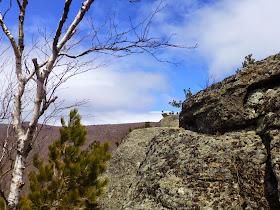 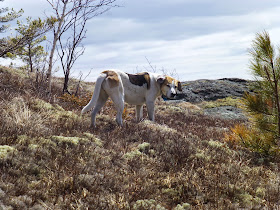 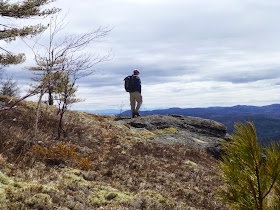 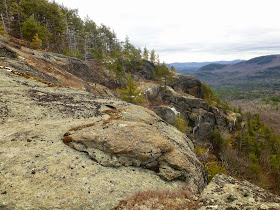 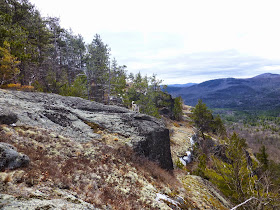 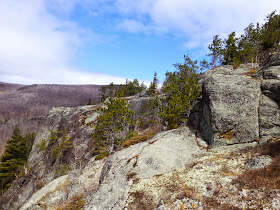 I was floored by this area.  It's amazingly beautiful and easy to get to.  The Blueberry Trail System seems to get light use, and this hill has probably seen very few visitors, but that's OK with me.  Leesa and I didn't mind having it to ourselves.

Eventually we retreated back to the trail system; which in itself is a gem.  Mountain bikers, trail running would love this network of trails on smooth woods roads and foot paths.  An additional bonus are the 3 structures on the network:  a cabin, a sugarhouse, and a leanto.  The leanto is pearched high on a ledge with great views of Elizabethtown and Cobble Hill. 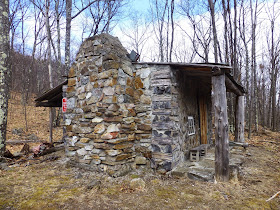 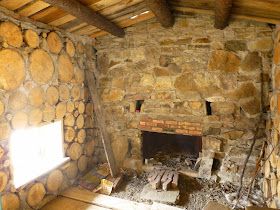 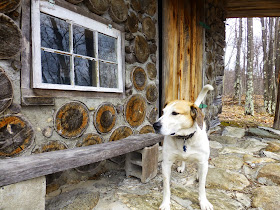 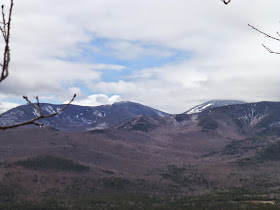 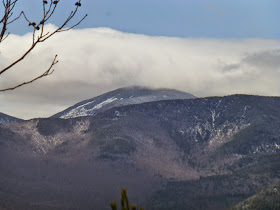 If you haven't been to this trail network in Elizabethtown, add it to your list.  You won't be disapointed.  It you like to bushwhack, Hill 617 and the western face can't be beat!