This hike turned out to be a really nice surprise, and it's really great when that happens.  This was really an awesome place to go.  Leesa and I were looking for a bushwhack hike with southern exposure and some open rock with views.  It looked like Holcomb Mountain in the Giant Mountain Wilderness would meet our needs to we decided to give it a go.

We parked on Route 9, across the street from the parking lot for Split Rock Falls.  We were careful not to block the woods road that accesses a private landowners property.  There is a cable across the woods road with a posted sign, but the area is state land for quite some distance before the boundary with the private land owner.

We walked in the woods road which follows the north bank of the Boquet River.  There are some pretty water holes in this area.

Once we reached the boundary with the private property owner, we turned north into the woods and followed the property line; first north, then west to the height of land at the base of the southern ridge to Holcomb.  This was the ridge line I wanted to use for our ascent.

The cloudy skies encountered on our drive had given way to glorious blue skies which remained throughout the rest of the day.  The southern ridge is a fantastic route.  It is not without its challenges howerever.  We encountered at least 5 bands of cliffs that we had to scout around to find a bypass route.  This was all part of the fun though.  The important part is that the woods were open the entire route; no clawing and scratching necessary.   We were pleased to find a significant amount of bare rock and lots of viewpoints, not just on this ridge, but the entire loop. 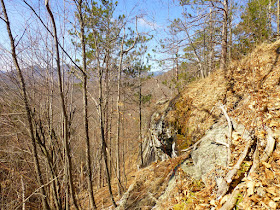 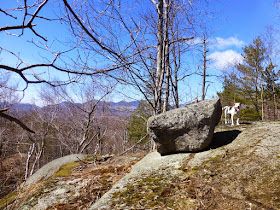 We reached the summit of Holcomb more quickly than expected since the hiking was so open.  While we checked out the views we admired the open rock on Deer Mountain to the NE.  We decided to continue on and pursue this mountain as well.  We didn't follow a direct line since the NE slope of Holcomb was steep and covered in snow.  We followed the SE ridge on Holcomb until we found an easier descent towards Coughlin Brook which lies in the valley between the 2 mountains.

We could hear the roar of the brook long before we saw it.  I was a little worried that we might have difficulty finding a way to cross the brook, but it was not a problem.  Soon we were climbing the south face of Deer Mountain.  Again, it was dry and sunny.  We followed a slight trough in the slope that took us to the middle of the Deer Mountian ridge line. 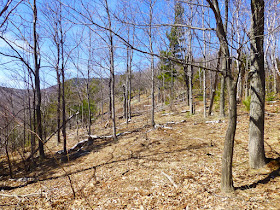 We encountered no difficulties on Deer Mountain either.  It was even easier since it had fewer cliff bands.  At the summit, Leesa decided she would stay there awhile, but she encouraged me to climb "Hill 771" which was just 1/3 mile NW.  Rev and I were OK with that we bounded off.


We got to Hill 771 in 15 minutes or less and found more rock and more views.  We now had even closer views of Bald Peak and the saddle as well as some distant views of the hills to the north in Elizabethtown.


Since was our turn around point for this day.  Rev and I went back to get Leesa and then we headed down the SE ridge of Deer Mountain.  Near the end of the ridge, we dropped down a cleft in the rock on the right to Coughlin Brook.  There was a bit more volume to the water at this lower crossing, but we found a way across.

We sidesloped the hill to angle back down towards Split Rock Falls.  We came out on the road only about a 1/4 mile north of our car.


There was a lot to like on this hike and nothing that we didn't like.  We'll be back to explore more in this area.  The weather didn't hurt anything.  It was absolutely perfect.  We had 55 degrees with blue skies.  No bugs yet.

If you like to bushwhack open terrain leading to great views, you can't go wrong in this area. 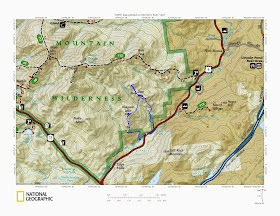 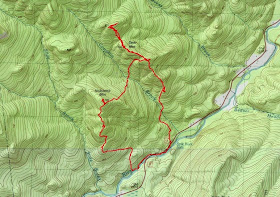