After thoroughly enjoying a hike up Holcomb and Deer Mountains in the Giant Mountain Wilderness Area last weekend, I came back today to tackle Noble Mountain.

I parked the car at the designated campspot off of Route 9, just north of the intersection of  Route 9 and 73.  With great difficulty (and with water shoes), I found a place to cross the Boquet River with only a couple steps taken in the cold water.  This was the hardest part of the whole trip.  In summer, and with lower water, it would be much easier.

Rev and I headed north winding our way through the series of cliff bands just north of the Boquet.

Next we followed the southern spine of the Noble Mountain ridge as it wound first NW then NE.

Threre were quite a few slabs of rock along the way where views were plentiful.


Just shy of the SE knob, or false summit, was a big slab of rock where I built a small cairn atop a pyramidal shaped rock.  Although the skies look cloudy in most of these pictures, there were more breaks of sun than expected; a pleasant surprise!

The SE knob was the highlight of the trip.  Great views and an interesting rock formation were the highlight.

The final push to Noble was easily visible to the north, and it consisted of light hardwoods.


The summit itself was unspectacular.  Some views could be found walking to the west edge of the ridge.  Lots of prickers/nettles were located in portions of the summit area. 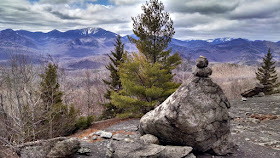 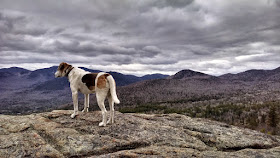 While Noble Mountain is less than notable, the hike leading up to the SE knob is interesting and worthwhile.