I often that the path less traveled.  Today was no exception.  The chosen route was a loop hike of Yard Mountain and Big Slide.  I went clockwise from John's Brook Lodge via the Klondike Trail to the Yard to Big Slide Trail, when down the Slide Mountain Brook trail.

This adventure started from the Garden parking lot in Keene Valley.  I was surprised when I pulled in that there were only 3 parking spots available at just after 8 AM.  It appears that most of the vehicles had arrived the day before and folks had stayed overnight in tents or at the ADK facilities.  I thought that since the winter hiking season had ended, there would be more space in the lot.

I started in on the Phelps trail towards Johns Brook Lodge (JBL) and the only fresh tracks ahead of me were from 2 people on skis.  Between the Garden and JBL, I saw 15 people on their way out.  Some had spent the cold windy night in tents.  The wind chill had been sub-zero overnight.  The weather gods didn't get the word that it is now spring.

It's 3.5 miles to JBL, but it's an easy walk on a firm surface and I got there in an hour and 10 minutes.  From JBL, the Klondike trail is immediately behind the left side of the building.  There is is a sign denoting the start of the red marker trail.

I was excited to find the Klondike Trail had a firm base with 2" of fresh powder on top.  It was just about perfect for snowshoeing and it was very pretty with the fresh snow still in the trees.  On the entire loop starting at JBL and back to the Phelps Trail I only saw 2 people (a couple coming down the Slide Mountain Brook trail).

The Klondike gets some skiers, but the trail to Yard doesn't get much traffic.  In winter it gets even less.  It certainly felt like the path less traveled today.  Once again, there was a base with a couple inches of powder on top, but as I got near the top (and along the ridge) the track was blown in.  I had to do a little route finding in a couple spots.  The trail is somewhat grown in, and is in need of some sidecutting.  Markers are also a little scarce. 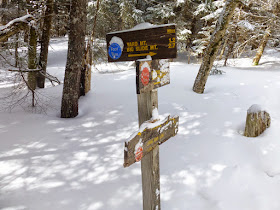 I passed some nice ice flows on the south side of the first sub-summit.  The temperatures had been generally cold, but the strong sun is causing ice to form. 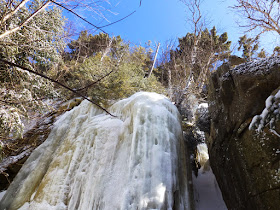 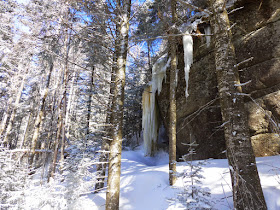 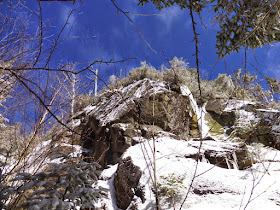 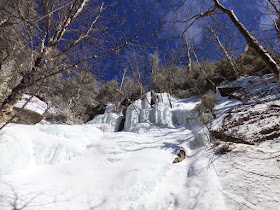 I had the best of both worlds today; I got to hike this loop that is little used, yet with a generally firm base until the ridge, I didn't have to break trail on the steep.  Re-breaking the wind blown ridge wasn't so bad; walking on a surface close to level.  I felt like I was far from civilization, yet I knew once I got to Big Slide, there would be fresh tracks,  I was thinking "this feels like a bushwhack, without the effort".  I got quite covered in snow from the tight trail and snow laden branches.  I also did a lot of walking hunched over  to get below branches when I could. 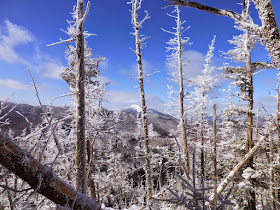 As expected, when I got to the summit of Big Slide, it looked like a quite a few people had reached the summit already this morning.  I was there at about noon.  I had the place to myself.  It had been windy on the ridge and I had been wearing my facemask, but the summit of Big Slide was sheltered from the wind and was getting hit by some strong sun rays.  It felt nice!  I gave Rev some food and we basked in the rays for a few minutes before heading down. 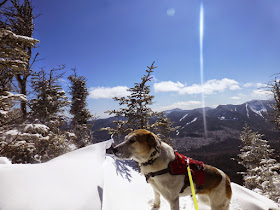 The 0.3 mile descent from Big Slide to the first trail junction didn't seem as steep as I remembered.  I was able to stay on my feet, even with Rev pulling me. 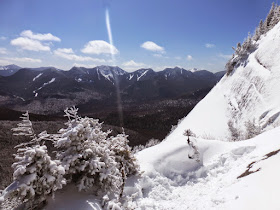 At the junction, I turned right to take the path less traveled.  Most people prefer to go back along the ridge over "The Brothers".  It's shorter and has better views.  I've done that enough times so I opted to turn right and take the Slide Mountain Brook Trail.

This trail, while pretty, has limited to no mountain views.  It does go along a nice brook (which was still frozen and snow covered today).  The trail has not seen any humans using snowshoes in the recent past.  All tracks in the snow were from bare booters.   Near the bottom, I ran into one such couple and easily passed them as they struggled without snowshoes .  Please folks, wear snowshoes when it's required.  I did my best to smooth out the trail with my snowshoes as I went down.

Once back on the Phelps trail, I had a easy 2.8 mile walk back to the car and saw no one.  Back at the parking lot around 2 PM and most of the cars were gone.  I signed out at the trail register and saw only 5 groups had signed in all day. 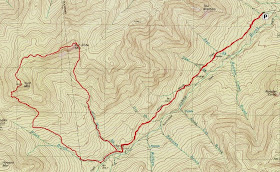