Here is a different kind of trip:  paddle-trail-bushwhack.  In winter it becomes:  walk on frozen lake-trail-bushwhack.  We realized it's getting late in the season to be out on the ice so we pushed this trip to the top of our list.

The trip is a hike up Mount Blue via Garnet Lake, the Lizard Pond trail and a bushwhack.  There is a parking lot and boat launch at the end of Garnet Lake Road.  Today the parking lot was occupied by ice fisherman and us.  We arrived about 10:30 to overcast skies, temp in the mid 20's and snow flurries.  The previous 2 days had been warm with rain.

The wet surface on the ice had re-froze to some extent, but as we walked across the lake, we broke through the top 2" of ice in many places.  It was a funny feeling, but there was still plenty of solid ice below the slushy surface.


The walk from the parking area/boat launch was a pleasant 0.8 mile walk.  We had wind at our backs and we watched a couple ice fisherman who had set up equipment in the south end of the lake.

I wasn't sure how the bushwhack part of the hike would turn out.  The climb is on the SE flank of the mountain.  I was hoping the sun and rain had melted a large portion of the snow and then the cold temps had firmed up the snow that was left.  Time would tell.

The access to the Lizard Pond Trail is in the narrows of the lake on the west side.  It is easy to spot and there is a trail sign there indicating 1.2 miles to Lizard Pond.

The Lizard Pond Trail is a snowmobile trail and we found a firm base there to walk on.  We wanted to walk to the lean-to, but we wanted to climb Mount Blue first, therefore we only followed the Lizard Pond Trail for about 0.6 miles to the height of land, before we donned our snowshoes and left the trail.  We headed NW and could see Mount Blue directly in front of us.  This wouldn't be the case once the trees leaf out.

Once off the trail, I immediately knew this would be a chore.  There was still 18-24" of snow on the ground and no firm crust to walk on.  Maybe up high things would be different.  Rev and I broke trail and Leesa gratefully followed in our tracks.

It was slow going.  Winter was alive and well here here on Mount Blue.  We moved at a pace of about 0.5 miles/hour.  It didn't matter much since this a such a short bushwhack.  Still, it took us 1.5 hours to climb the 3/4 mile bushwhack. Leesa actually decided to turn around after we reached the open rock viewpoint that lies 0.2 miles below the summit.  She didn't care about bagging the peak, she just wanted the view. 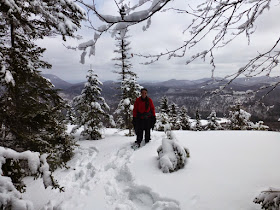 Rev and I continued onward and upward.  We clawed through a small thick area and then is was relatively open to the top.  Though open, trees surrounded the summit that blocked most of the views. 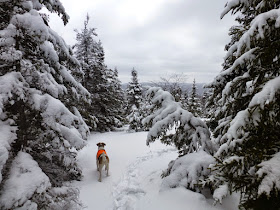 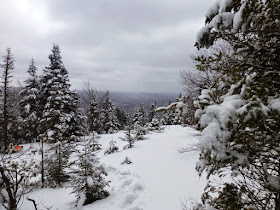 I tagged the summit then Rev and I bombed down the hill to catch up to Leesa.  We got back to her about 2/3rd's of the way down. 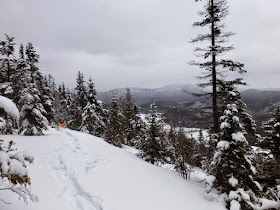 Once back on the Lizard Pond trail, we turned right to follow the trail SW for 3/4 mile across Lizard Pond to the lean-to on the south shore.  The tracks around the lean-to weren't fresh, but perhaps the wood-bearers would be back.

Snowmobile tracks led right to the Lizard Pond lean-to.  Someone had left a huge pile of split wood there (probably pulled in on a sled from a snowmobile). 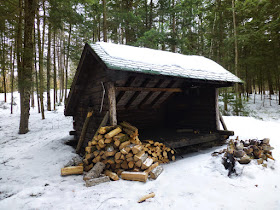 We stopped and and some food at the lean-to and then turned into the wind to walk NE back to the car. 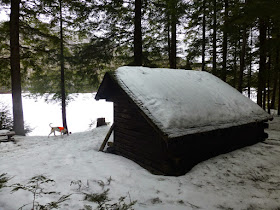 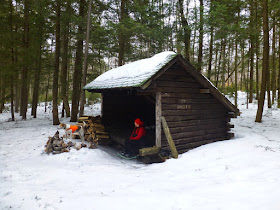 Some day we may come back to do this trip in the fall for a boat/hike combo.  It's a great area and the bushwhack would be short and fast when the snow is gone.  Still a nice day out and we got a good workout for a short hike.