﻿
On Saturday, Leesa and I headed to the Ausable Club in Keene Valley, NY to tackle Sawteeth for her 43rd High Peak.  We had slept in on this morning because we were tired from the week, so we didn't get to the trailhead until 10 AM.

It had been a long time since I had been on the Scenic Trail to Sawteeth, so we ascended via that route.  Visibility was good although it wasn't a bluebird day.  The forecast gave the threat of showers during the day so we were expecting some weather.

We traveled the 4.1 miles to the dam at Lower Ausable Lake in about an hour and 20 minutes.  From there, we picked up the Scenic Trail which follows the shore of the lake for a distance before veering away from the lake to climb Sawteeth.

It was warm and there was some humidity, so it didn't take long to begin to sweat.  We stopped at each of the overlooks to relish the view and catch some breeze while on the open rock.     ﻿ 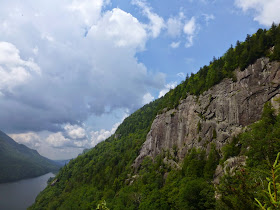 There are 4 or 5 ladders that have to be negotiated on this route.  They are all in fine condition.
﻿


About 3/4 of the way to the summit, we heard a loud clap of thunder.  Then, for a while, all was quiet.  Later we started to hear gentle rolling thunder.

At the summit of Sawteeth, we were rewarded with great views of the Great Range. 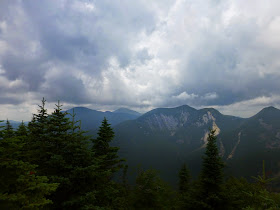 From the summit, we continued a clockwise loop by descending the Weld trail.  It is here that we saw our first hikers of the day.  We saw three groups in total.  We stopped to admire Rainbow Falls and also took the Rainbow Falls spur trail to the base of the falls (highly recommend).

We got back to the bridge at Lower Ausable Lake between 3:30 and 4 and decided to take a quick trip up to Indian Head.  Soon after we started to climb, it began to rain.  We continued to climb, hoping to see some interesting skies.


Our luck was good on this day.  As soon as we reached Indian Head, the rain stopped and the skies cleared.  Visibility was good and cloud formations were moving about, creating interesting light.

In our opinion, our luck became even better as dark clouds quickly moved back in as the skies prepared to unleash a bigger rain upon us.  It made for some fascinating viewing from Indian Head looking south along Lower Ausable Lake.﻿ 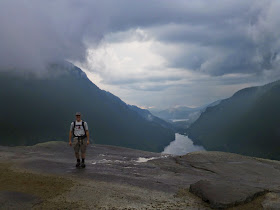 We knew we couldn't stay too long, but we did stay long enough to see some fascinating clouds changes and a "light at the end of the tunnel"! 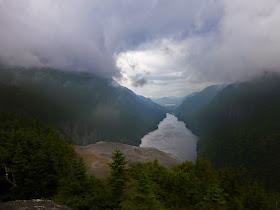 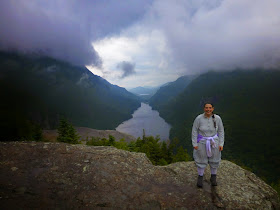 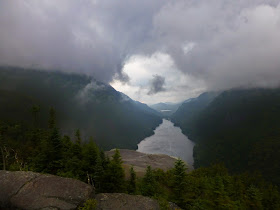 The thunder continued and we thought it best to get off the exposed shelf of rock and back under cover.  We began to make our way back down to the Lake Road, but only got half way before the rain began to come down again.  This time it poured and continued to pour almost all the hour and a half it took us to get back to the car. 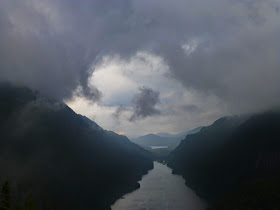 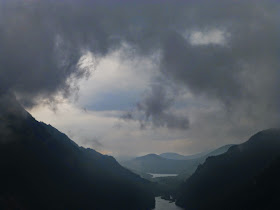 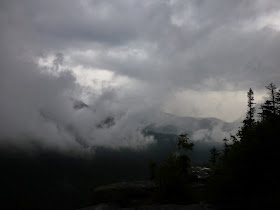 Bluebird days are nice, but it's worth getting caught in a summer rainstorm to experience  fascinating cloud formations.  For us, it was the highlight of our day. 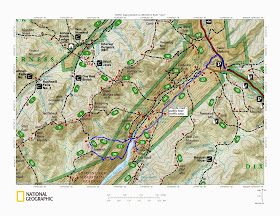