Leesa and I took a few hours mid-day on Sunday to explore the Jessup River by kayak.  Our point of access was Route 30, south of Indian Lake.  From this location you can paddle upstream or downstream, the current is slow enough that paddling upstream is not a chore.

This river is described in Phil Brown's new book, Adirondack Paddling:  60 Great Flatwater Adventures.  If you haven't seen the book, it's worth a look.  I think it is well done and the text is complemented with great photographs and maps.

There is a parking lot on the west side of Route 30 on the north side of the bridge over the river.  We parked and carried the boats about 30 feet to the water.  We weren't sure the predicted scattered rain was going to hold off, so we chose to paddle upstream first.  The upstream paddle was described by Phil as being more wild than the downstream version, plus you can paddle further upstream.  If you paddle downstream, you come to some moderate rapids after a couple miles.


The river is small but inviting.  At times, it appeared that the river was going to peter out, only to widen again.  We carried over one small beaver dam on the upstream paddle, while paddling through 4 very small ones.  On the return, we were able to paddle through them all without getting out of the boats.
The river meanders quite nicely and provides a different view around every turn.  I thought the scenery became more beautiful with each turn.  ﻿ 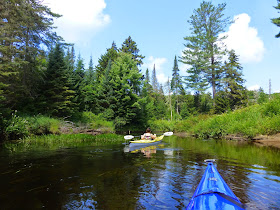 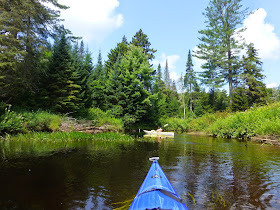 About 1.8 miles into the paddle we began to encounter nice sand banks on the turns.  It wasn't long before we beached the kayaks and took a swim.
﻿ 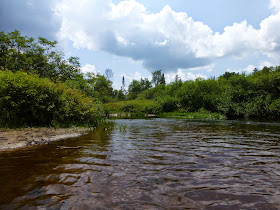 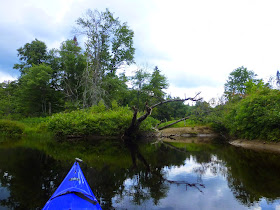 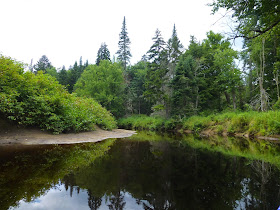 At the 3.4 mile mark, we came to a more significant dam across the river.  This could have been  carried over but we chose to turn around at this point (the weather was getting more questionable).  If we had paddled another .7 miles or so, we would have come to Jessup River Road just east of Perkins Clearing.  This gravel road provides access to the Pillsbury Mountain trailhead.
Although the current was slow, the downstream paddle was much easier and faster.  Once back at the bridge, we decided to call it a day because we could tell it was going to be raining shortly, and it did.  We'd have to save the downstream exploration for another day.
We both liked the paddle upstream although we did have a couple deer flies and horse flies that wanted to be our friends.  The smaller rivers and streams tend to have more bugs because you are closer to land.  The bugs weren't pesky enough to put a damper on the paddle though.
Paddle Stats:
Paddle Distance:  6.8 miles
Paddle Time:  2.5 hours (including swimming time)