This was a repeat of a trip I did in July of 2013 with my dog Rev.  This time my wife Leesa wanted to go this route so she could hike Dial and Nippletop; two peaks she had not climbed.  These would be #'s 38 and 39 for her.  Since Rev was going with us we used Gravestone Brook to get from the Dix Trail to Dial.

It was a nice morning; sunny and about 50 degrees.  An afternoon thunder storm was possible, but we never saw any rain.  We arrived at the Round Pond trailhead just after 7:30 and claimed the last parking spot in the lot.  In minutes we arrived at Round Pond.  There was a tent at the first campsite on the right.  Three canoes were out on the pond with men fishing.

It was a peaceful morning at the pond.  I'm sure the men were enjoying the fishing.  We continued on and reached the height of land at 1.6 miles after 45 minutes from the car.  Next we dropped down along the Boquet River and followed it towards the Boquet lean-to. 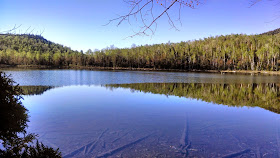 This was the first time on the Dix Trail for Leesa in spring.  Her only previous trip on this trail was in winter so everything looked different from when she last was here.

At the 3.5 mile mark we reached Gravestone Brook and it was time to do a little bushwhacking.  From my previous trip, I recalled that the right side of the brook was easier terrain to navigate and we chose that way again.  There is a slight herd path (animal path) that we followed along the way.  The biggest impediment was a lot of Witch-Hobble which would trip us up occasionally.

We enjoyed the cascades of Gravestone Brook.  There are numerous 4' drops and lots of areas where water slides down sheets of rock.  We weren't always at the waters edge.  At times, the walking was a little easier a short distance away from the brook.

Near the top of the brook, it splits in a Y.  We took the right hand fork to avoid bushwhacking up the steeper left fork.  Shortly the brook ended and soon we popped out on the trail near the Dial/Bear Den col, just slightly on the Dial side.  The elevation at this point was 3200'.

The trail felt easy after the bushwhack, and we quickly climbed the 800' to the summit of Dial.  Number 38 for Leesa.  There was one lone gentleman enjoying the view of the Great Range from the summit rock.  We still had blue skies and some nice puffy cumulus clouds.  Rain was nowhere in sight.

We stopped and had some left over pizza here.  I had brought a few drinks (some frozen) and the frozen ones weren't thawing as fast as I thought they might.  I fact, they were still half frozen when we got back to the car.

As we made our way up the pointless ups-and-downs (PUDs), we soon began to see a few hikers and had a couple nice chats along the way.   We reached the summit and shared it with four other folks before they all left and we had a little time to ourselves at the top.  I didn't expect that on Memorial Day weekend.  High peak number 39 for Leesa!

On the way down we saw one man with a dog near the sign for Elk Pass.  I didn't think to ask him which way he came up with his dog.


We had an uneventful descent.  The bushwhack seemed longer on the return, even though it was downhill. 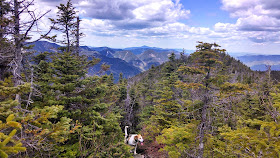 We stopped twice to soak our feet in the cold water on the return; once at the bottom of Gravestone Brook, and once at the Noonmark Trail junction.  It always feels good to stick hot feet in cold water! 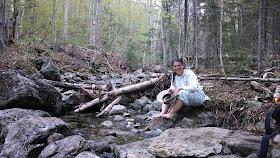 We saw one tent pitched a mere 20 feet off the trail just a little east of the Noonmark Trail junction.  The holiday weekend crowd don't always know the rules (150' from water or trail, and no camping above 3500' unless at a designated location).

We got back to the car around 6:30 after another nice day in the woods.  Rev slept on the way back to Schroon Lake.