Dirgylot Hill is a new designated parking lot on Route 9, just north of the Town of Schroon Lake, and immediately south of Schroon Falls.  The sign just went up late last fall.  At that time, I pulled into the parking area and nothing else caught my eye.

Today, Leesa and I were passing by and I glanced into the parking lot and a second sign caught my eye.   It was a sign at the back of the parking lot indicating public easement to Northway culvert.  That was all I needed to see.  We changed our hiking plans and pulled in and parked.  Why re-hike a trail we had done before when this was new to us and right before our eyes.

I expected a footpath or jeep trail to the culvert and then plain wilderness beyond.  We got our gear together and started out.  The first part was as expected.  It was a fine jeep trail leading us to the culvert under I-87.


It was just a 5 minute walk to the culvert (which was clean and in fine shape).  It was also plenty big to avoid claustrophobia. 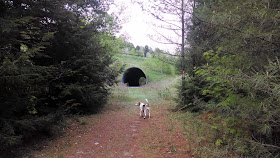 Once through the culvert, the nice old jeep trail continued.  We kept walking, thinking we would follow the trail as far as it went.  Shortly we came to a fork in the trail and chose the left fork.  It looked like it received more use.

We started seeing old spring houses.  I believe we saw five.  I had no idea what their purpose was.  There was nothing else around.


The trail hooked all the way around Dirgylot Hill and then headed SE.  We continued to follow until we sw a clearing on the left.  I thought it might have been a campsite of sorts;  then I saw a plaque and a small gravestone.  Still there was nothing else around. 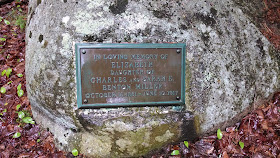 Shortly after continuing, we came to a T.  To the left was sawhorse with a posted sign on it.  We could see a farm field in the distance.  This was the property that is on the dead end road just west of I-87 Exit 28.  To the right were no signs, so we went that way.  We saw one more spring house (the stone one pictured below), then the trail turned SW then North. 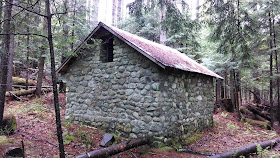 As we headed north, we had done 3/4 of a figure eight by the time we were coming up alongside of Smith Hill on our left.  The woods had been beautiful and open the entire time we had been hiking.  We decided to shoot up Smith Hill to see what we could see.  It was an easy 10 minutes to the top, but there were limited views with the leaves now on the trees.


After Smith Hill, we went back down to the jeep trail.  It began to peter out, but we traveled a short distance NE and were back on the trail to head out.  While heading back, we went up Dirgylot Hill to the summit.  It was similar to Smith Hill; open canopy of trees.

Next we returned to the fork we had first seen on the way in.  This time we took the right fork.  The jeep trail went steadily NW.  It later turned to a herd path with trees cut with blaze marks.  After a descent to a drainage and re-climb on the far side, the blaze marks stopped but the herd path continued.﻿


This herd path continued in a NW direction on the west side of an un-named drainage.  The path really looked like the remains of an old trail or jeep road at times.  After perhaps 1.5 miles, we saw a waterfall in the drainage and took a closer look.  It was a nice spot.  Someone else must have thought the same thing; there was a tarp covering a bunch of camping gear there.


Back on the path, we continued further until the drainage turned to head into the col between Hoffman Mountain and Blue Ridge Mountain.  It was time for us to turn around, but I started thinking.  Maybe I'll attempt to climb Blue Ridge from the east, continuing from the point where we turned around when climb Blue Ridge as part of the ADK hundred highest.  If it gets too difficult, I can always abort, but the distance from where we turned around, to the summit of Blue Ridge is no more than 1.5 miles.

All the jeep trails and herd paths we walked on this day were in fine shape and a joy to walk on.  In addition, all the woods were open and lovely and inviting for bushwhacking.  We'll be back for sure.  There would also be great XC skiing here.

When I got home, I pulled up an old topo map and I found out that there was indeed an old trail in this area.  I believe we were on it for awhile when we were heading NW towards Blue Ridge Mountain.