I was driving home from work on Thursday afternoon, listening to the radio, when I heard that Lake Champlain was 99% frozen for the first time in many years.  My immediate thought was that it would be a great time to xc ski to Valcour Island.
Valcour is just south of Plattsburgh NY and lies just .6 miles offshore.  I believe the entire island is owned by the State.  The island contains 895 acres and is about a mile wide and two miles long.
In recent years the lake hasn't been frozen to allow winter access to the island.  My wife, Leesa, has been wanting to do this trip, and now was the time.
The island has a fascinating history beginning with the Revolutionary War.   It also has a neat lighthouse on Bluff Point.  For a nice map, check out Andy Arthur's map.  One more thing to look at is this newspaper article from the Press Republican from 1992 talking about skiing to Valcour.
The stars aligned for this trip.  We had bluebird skies, 20 degrees F, light winds, 8-12 inches of fluffy snow and a frozen lake.  If you ever have the chance to do this trip under similar conditions, it's a great day.
﻿
We pulled into the Peru boat launch site at 9 AM and got our gear together.  There were 2 guys in the lot getting ready to pull a portable ice fishing shanty out onto the lake.  Our dog Rev was excited, as usual for a new adventure.  ﻿


The skiing was easy on the windblown snow on the lake and it only took us less than 15 minutes to reach the island.
We "landed" just south of the Bluff Point Lighthouse, and went to check that out first.  The lighthouse was locked up, but it appears to be in pretty good shape.
﻿ 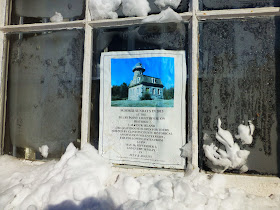 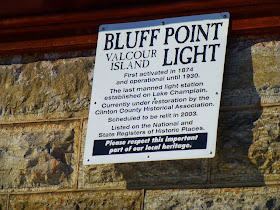 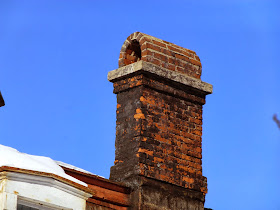 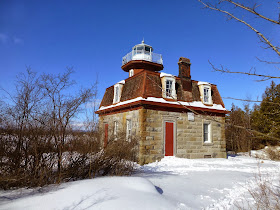 The trail network on the island is essentially 3 loops:  a northern loop, a central loop, and a southern loop.  We decided to head for the southern loop first, and if the skiing was good, we would consider doing the entire perimeter loop instead of the sectional loops.  This is what we ended up doing.  The snow was just perfect for skiing.  About half of the perimeter was broken out.  I broke trail on the rest, but it wasn't difficult.
After an hour form the car, we were skiing south on the western shore of the island.  45 minutes of skiing brought us to the SW corner, after having passed an impressive old stone house.  It was windy but as soon as we hit the southern end of the island and turned east we were sheltered from the wind.  After 30 minutes more, we reached the SE corner of the island.  We stopped there for some snacks at a sunny warm spot.

Next we made our way up the east coast of the island.  This side of the island had some nice bays and harbors.  We explored the nooks and crannies.  Tiger Point was especially nice (at least in winter).
﻿
﻿

We were still feeling good halfway up the eastern side, so we continued north and ignored the bailout loop options heading back westward across the island.
There weren't many trail discs on this side of the island, but the location of the trail was pretty obvious and it hugs the edge of the water pretty closely.
﻿


We soon returned﻿ to the lighthouse and got back out onto the ice just south from there.  Again we had a quick 10 minute ski across the ice back to the car.
We both really enjoyed this trip.  The terrain is pretty much beginner level, but it's a unique experience skiing around the island and it's not often that it can be done.  It's definitely worth keeping in mind for the right conditions (as we had today)!
If you want to see even more pictures from this trip, I've got them posted on a Picasa Web Album.
XC Ski Stats:
Ski Distance:  10 miles
Ski Time:  6.5 hours
Total Vertical Gain:  ~ 600'