I didn't have a lot of time to get out today, but I knew I could get out for a little while, and I knew just where to go.  I wanted to park at the Buck Mountain trailhead off of Pilot Knob Road on the east side of Lake George, but rather than hike Buck Mountain, I wanted to XC ski the Inman Pond trail to the height of land.

I expected this to be a great ski if snowmobiles had not been on the trail.  I was in luck, the trail was virgin snow.  I got to made 1st tracks!  It wasn't easy, there was 12-18" of fresh snow blanketing the trail.

The trail was packed for the first quarter mile until the split where the Buck Mountain trail veered left.  The snowshoe track veered left here as well.  I put on my climbing skins and continued straight on the Inman Pond trail.  My dog Rev wanted to be out front so she led the way.  It was funny watching her trying to wade through the deep snow.

I remembered that that trail climbs steadily, gaining about 1000 feet in 2.25 miles.  It's not steep, but makes for a nice glide out.  Of course in the deep snow, the ascent was slow.


After 1.3 miles, I came to the only sign of the day indicating 1.3 miles back to the trailhead.  At the 1.5 mile mark, Rev decided she didn't need to be in the lead anymore and she dropped back to vulture in my tracks.  I don't blame her. 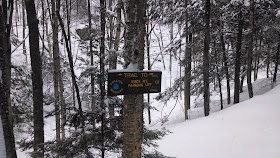 You can see in the picture below that she is chest deep in snow.  I took over the lead and continued the climb until we reached the height of land at 2.25 miles.  This is where we turned around.  I didn't want to start skiing down the trail towards Inman Pond.


It had taken us 1.75 hours to go 2.25 miles in the deep snow, but the payoff was coming.  The whole reason I chose this trail was that I wanted to ski down that nice grade and the 1000' descent.  It was great.  Rev ran along behind me, having little to no problems running in my track.

I did pass one couple climb the trail following in my track.  They thanked me for breaked trail and we each continued on.  Before I knew it, I was back on the flat at the Buck Mountain trail junction.  It had only taken 40 minutes to come down.


I thought this was a great ski.  You'll want to consider wearing climbing skins if you try it.  The grade is steep enough that it is difficult to climb without skins.  It's a great ski down if the conditions are right and today was a good one.