I've gone to Pharaoh Lake, in the Pharaoh Lakes Wilderness, several times from the south, but never in winter.  I knew this would be a good ski trip if conditions were good.  It would also be my 3rd day in a row of skiing, and 2nd for Leesa, so we didn't want to overdo it.
The tailhead is just north of the northern end of Brant Lake and is off of Beaver Pond Road.  In the summer, you can drive all the way in to Mill Brook if you have a high clearance vehicle.  In winter, the parking area is one mile south of Mill Brook.
I didn't expect that we'd be making 1st tracks.  This is a popular area, and the new snow has been on the ground for 4 days now.  I was right.  8 groups of people had signed in on Saturday.  The tracked trail was a bit sloppy, but there was room for me to create a fresh track adjacent to the existing tracks.  Someone had also skied in pulling a pulk.
We skied the first mile to Mill Brook in less than 20 minutes.  This area appears to have gotten a little less snow than the areas I skied the last two days.  There was perhaps 8-12 inches of new snow here.
After Mill Brook is the only section where there is any elevation gain.  The trail climbs about 150' just north of Mill Brook.  After that, it is mostly level the rest of the way to the lake.  We skied the 3.6 miles to the lake in an hour and 40 minutes.

Once at the lake, we skied on the lake near the western shore to lean-to #1.  There was a couple camped there, and they were having a camp fire.  Across the way, lean-to #6 that had burned down two years ago, has been rebuilt.  There were people there as well and I could see they had a dog.
Leesa decided to head back at this point.  I continued on for another .6 miles, skiing across the lake over to Watch Point and lean-to #5.  Once again, the weather was in our favor.  The forecast was for mostly cloudy skies, but we had mostly sunny skies until we were almost out.

The lake was frozen solid except a small section right at the outlet.  It was a quick ski over to Watch Point but cutting across the lake.  Nobody had been out on the point. 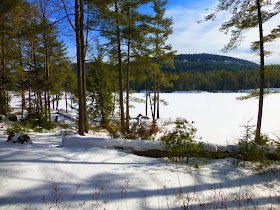 I didn't stay long out on the point.  Leesa was on her way back and I had the only car keys.  Rev and I picked up the pace, and we caught up with Leesa about a third of the way back. 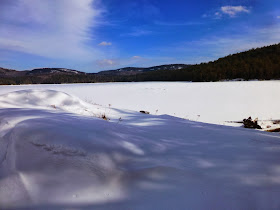 It's nice having the downhill slopes on the way out and it only took an hour and a quarter to get back to the car.


I feel like I took full advantage of this snowstorm by skiing 31 miles in the last 3 days.  It's been a long time coming in getting some good snow in the woods this winter.
Ski Stats:
Ski Distance:  9.1 miles
Ski Time:  3.5 hours
Total Vertical Gain:  ~600'