One of the best hikes that I know of is the traverse of Rocky Peak Ridge in the Giant Mountain Wilderness.  I've been itching to do it again and I thought today I'd drive past the trailhead on Route 9 in New Russia and see what I thought about giving it another go.
The parking lot had not been plowed, but I was able to pull off the shoulder of Route 9 and park.  I checked the trail register and saw that a group had snowshoed in 4 days prior (2/18) and there itinerary was a traverse to Rou﻿te 73.  I could still see their snowshoe tracks.  The rain of the previous day hadn't wiped them out.
I got my gear together, and just as I was getting ready to start out, 3 college guys pulled up behind my car.  They had spotted a car on Route 73 at Roaring Brook Falls and were planning a traverse.
I started up, hoping I could get to Rocky Peak and then I'd assess what to do next.  It was 30 degrees and the valley was supposed to reach the mid 40's, but it was supposed to be very windy up high.
I found the  climbing to be easy.  The 4 day old tracks provided a pretty good base.  I went up and over Blueberry Cobbles.  The skies were alternating between clouds and sun.  I could here the wind above the trees, but I was mostly sheltered. 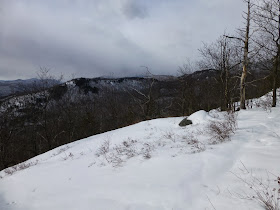 My dog Rev and I made good progress until we reached the summit cone for Bald Peak.  The cone has quite a bit of exposure to wind and the wind was freezing the wet snow creating a slick ice surface.
I was breaking through the crust and my snowshoes were gripping fine, but Rev was slipping and sliding on top of the crust.  I had her harness on, with the leash clipped to it, so I could prevent her from sliding too much.  She was expressing displeasure about continuing the climb.  It wasn't feasible for me to pull her by the harness, so I decided we would turn around.
﻿ 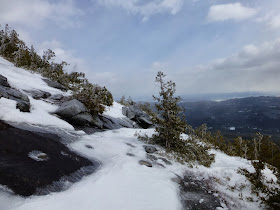 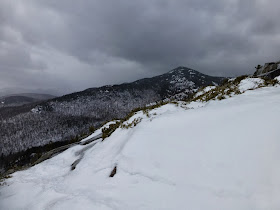 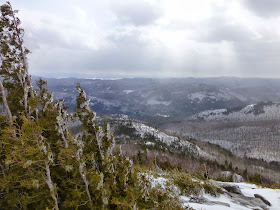 Soon I ran into the 3 guys that started out after me.  They were continuing to climb, and still planned to complete the traverse.  Going back down was easy, but the snow was quickly getting soft.
The skies were increasingly blue as I headed down.  Some of the pics below are looking uphill, but they were taken on the way out.
I could see some streams forming from melting snow and in some spots, my tracks from the morning were now in deep slush.
﻿ 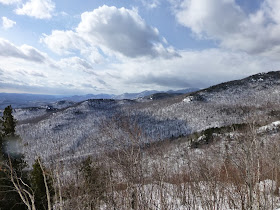 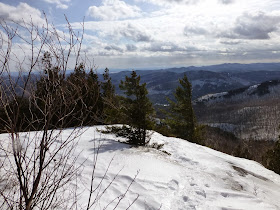 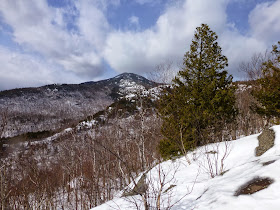 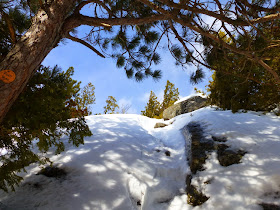 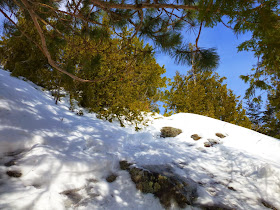 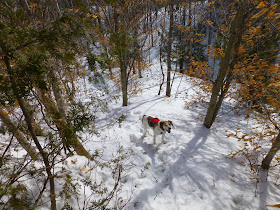 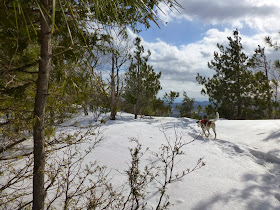 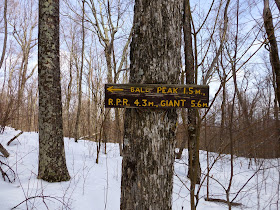 When I got back to the car, I saw that it was 45 degrees!