I suspected that this weekend would be my last chance for the season to get out and do some backcountry skiing.  The snow storm that came through last Tuesday left about 12 inches of snow in the central Adirondacks.  We were also fortunate that a relatively cold spell came in afterwards with some stable weather so ski conditions held good into the weekend.

My pick for Saturday was to go to Upper Works (near Newcomb) and ski towards Duck Hole.  I had also heard that the Henderson Lean-to had recently been moved and I wanted to see how that looked now.

Ski conditions were perfect.  It was in the mid 20's with a nice ski track and about 1" of powder on top of that.  It took me about 40 minutes to ski to the Henderson Lean-to.  The Lean-to was moved about a month ago.  It was moved about a 100 yards up the hill away from the trail and the stream.  It also a new roof  and rafters and some new logs.  It looks good!  Nice work. 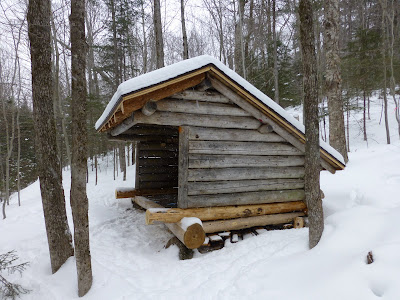 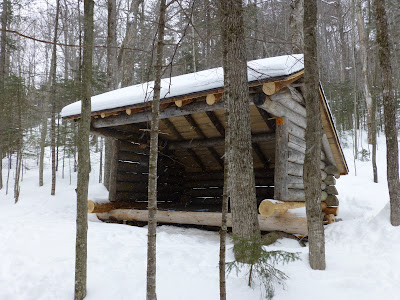 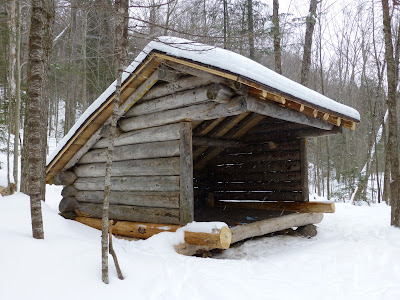 After I left the Henderson Lean-to, I retraced my tracks .2 miles south to the trail leading to Duck Hole.  I followed the Duck Hole trail .6 miles around the northern end of Henderson Lake to the NW shore of the lake where there is a 2nd Lean-to.  I had heard about this one and it is now shown on the new High Peaks National Geographic map.

It is a slightly different style, and according to the plaque, it was built by several families with the help of DEC.   I am curious as to the story behind this lean-to.  I'm also curious about who owns and maintains it.  Apparently it is run a little differently. 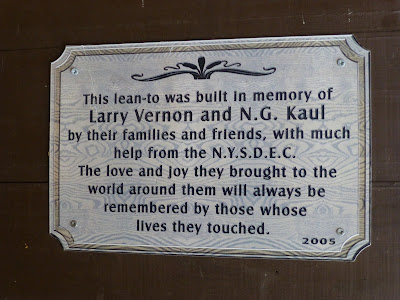 The Henderson Lake Lean-to has a nice location with a view of the lake.  I could also see a fire ring under the snow, although I would be surprised if camp fires are allowed here.

From the Henderson Lake Lean-to, I continued on my ski trip and went as far as the Upper Preston Pond before it was time to turn around.

Incidentally, I had my dog Rev with me on this trip.  I had her on the flexi-leash, with the leash attached to the hip belt on my ski pack.  She was able to pull hard enough that on the flat she could pretty much just pull me along.  No poling or kick striding needed.  Made my job easy!

Once at the pond, it was time to head back.  This summer I want to go farther in to see how Duck Hole looks, now that the dam is breached.  I haven't seen it since the damage from Hurricane Irene.

The snow conditions really were great.  A couple snow squalls came through while I was out.  It really didn't feel like it was the end of the ski season but I won't we skiing Easter weekend, and by the weekend after that who knows how the snow will be.  I savored this trip in case this weekend is the end for this winter.