Leesa and I had some time today for a couple hour hike and we decided to climb Buck Mountain on the east shore of Lake George from the north, from Hogtown Road as we hadn't done that trail before.  It was a beautiful day in the woods with temps in the mid 40's.  There was no wind, lots of sunshine and blue skies.

The gravel road to Hogtown was muddy as always, but it was firm.  We got to the trail head and were surprised to see 5 cars in the parking lot.  We thought everyone would be doing yard work or getting ready for Easter. 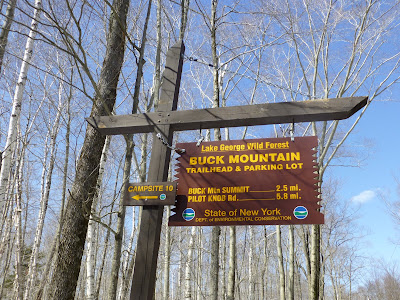 There was a couple inches of snow on the ground in the shade.  As we climbed. the snow got deeper and there was probably a foot at the summit in spots where the sun doesn't melt it away.  We passed most of the people hiking.  They were mostly casual hikers wearing jeans and sneakers.

We had on our hiking boats but didn't use Microspikes or snowshoes.  The snow was soft and mushy.  The route to the summit from Hogtown is 2.5 miles long with a trail head elevation of 1200'.  With the summit elevation being 2330', it is only a little over 1100' vertical to the top from Hogtown.  The other approach, from Pilot Knob, is 3.3 miles long with the trail head at 500'.  Either approach is relatively easy.  The Pilot Knob approach is more popular, and also have some great views from the trail before you reach the top.

This route from the north doesn't reward you with any distant views prior to the summit, but it's nice trail.  Once you reach the summit of course you are blown away by the beautiful view of Lake George.

The ice is about half off the lake and we could see a couple boats out on the open water.  It was wonderful on the summit.  With the bright sunshine, the summit rocks were actually warm to the touch and it was nice to sit on the rocks and soak up the sun.  It's been a long time since we could do that.

Our trek to the summit took about an hour and 15 minutes.  We stayed on top for about 30 minutes before heading back down.  It was a fun descent in loose mushy snow.  Other groups of young adults were having a great time glissading down the trail.  We did too.

We got back to the car at about 4:15 and it was time to head home for dinner.  Another 3 months and the summit will be covered in blueberries!