One of the things I do when I buy a new version of a map, is compare the map to the previous version to see what has changed.  In 2012, National Geographic published an updated map # 743 (Lake George / Great Sacandaga).  There are quite a few changes on the new map.  One thing I like is that most of the state land parcels are now labeled, so you know what tract of state land they belong to.

Some new trails are shown on the 2012 map including trails in the Cat & Thomas Mountain Preserve, operated by the Lake George Land Conservancy and trails just west of Route 9N at the north end of Northwest Bay.  These trails are on a piece of land that is now shown on the map as state land, whereas the previous version showed this land to be private.  Three loop trails are indicated on the new map.  I decided to visit these trails today to take a look.

The first thing I noticed is that the trail network is not obvious from the road.  I drove up and down the road and finally found a little unmarked pull-off that was the only possibility for where the trailhead was.  I parked and started in, to see if this was indeed the trail.  I quickly saw yellow discs placed by the NYS Dept. of Environmental Conservation.  There was no trail register or kiosk or parking sign.  I followed the yellow loop   which went alongside an unnamed brook.  A blue trail forked off to the right, but due to high water from recent rain, I was unable to cross the brook.  The yellow disc trail creates the smallest trail loop, which I measured at 1.7 miles.  I took the loop counterclockwise.  At the halfway point, the trail crosses a little knoll with a seasonal partial view of Northwest Bay.


I continued on and did not see any other loop trails.  Near the end of the yellow trail loop, the discs not few and far between and suddenly became Lake George Land Conservancy discs that were obviously much older.  When I reached my starting point, I was surprised that I hadn't found the other loop trails, so I took the loop again.  This time I found the western point where the blue trail meets the yellow trail.  It was just south of the knoll at the midway point in the loop. 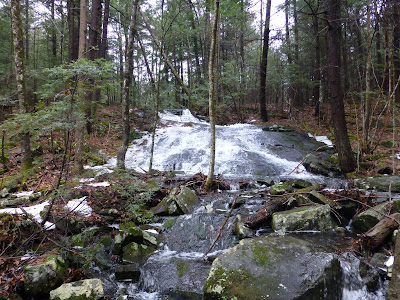 I started out on the blue disc trail, which was also Lake George Land Conservancy discs.  Once again these discs looked older and they were spaced very far apart.  I was spending too much time trying to find the trail discs, so I just began bushwhacking towards Pole Hill Pond, which was my destination.  The blue trail was headed that way and sometimes I ran across discs.  None of these trails are visible on the ground.  They must not get much hiker traffic.

After approximately 1.5 miles after leaving the yellow trail, I came to east shore of Pole Hill Pond.  The pond was still covered in ice.  I started counterclockwise around the pond.  At the center of the north end, there is a spot that would be nice to camp at.

I continued on from the pond to climb the unnamed hill to the north.  The map showed largest loop of the trail went over the summit.  Once again I saw occasional blue discs, but they would have been hard to follow. 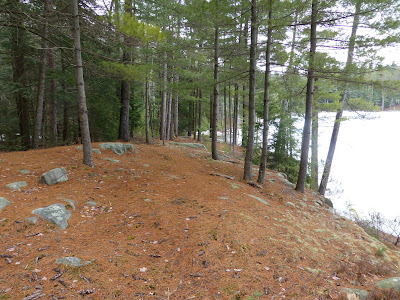 Just northwest of the pond, I hit the state land boundary and saw new signs, yellow paint and flagging. 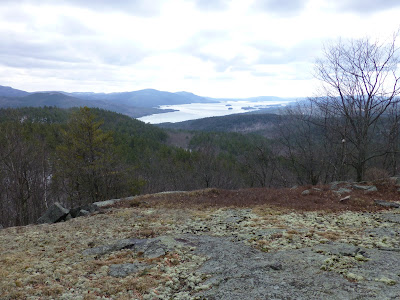 Along the ridge of this hill I saw more blue discs, but it wasn't worth trying to follow them.  I continued easterly to descend the hill, then hooked back around to head SW and work my way back to the trail.

I regained the blue trail near where I had started my bushwhack, then followed my track back to the yellow trail and back to the car.  This whole area was pretty.  The tree density was light throughout the hike making it easy to head whatever direction I wanted to go.

The pond and the hill were nice features.  There was no snow on the first half of the hike, but there was knee deep snow up on the shady side of the hill.  All the creeks and brooks were overflowing with water and snow melt from the heavy rain yesterday.  It made for an interesting walk.  The sun came out later in the afternoon.  It was a fine day in the woods.