Today we switched plansand went with a last minute Plan B.  We arrived at Upper Works about 9 AM this morning fully intending to hike to Flowed Lands to check on our adopted lean-to at Herbert Brook.  It was alternating between snow, sleet and rain and showed no signs of stopping.  We didn't have adequate gear to be out in a cold rain for hours on end, so I came up with an alternate plan.

We parked on Blue Ridge Road (Boreas Road) at a lone parking spot directly south of Vanderwhacker Pond.  I had been to the pond before, but Leesa had not.  When I was there, it was winter, so I didn't get to see what the pond looked like.  We also wanted to climb the un-named hill to the NW of Vanderwhacker Pond.  This hill is part of the newly acquired Boreas Pond Tract.

We followed the herd path that fisherman use to get to the pond.  It is easy to follow for the most part.  It crosses the outlet brook 3 times in the one mile walk to the pond.  We approached the pond from the west side, where there is a two tiered beaver pond with two dams.

Once at the edge of the pond, we could see 3 loons out on the pond.  To our surprise, they swam towards us to get a look at us.  There was no nest nearby that we could see.  They serenaded us for a couple minutes and then we moved on. 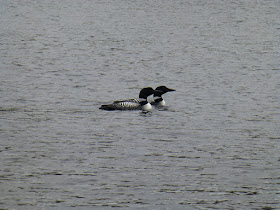 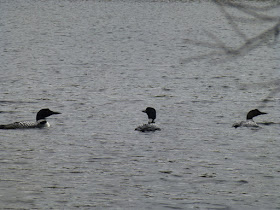 We left Vanderwhacker POnd and sets our sites on the un-named hill to the NW.  When we reached the Boreas Pond Track property line we found yellow diamond shaped discs.

We noted Trilliums in bloom everywhere as we climbed.  The hillside had obviously been logged many years ago as most the the trees on the hillside were tiny.  The hill was almost exclusively hardwoods and there was a delightful ridge at the top connecting the true summit with several lessor summits. 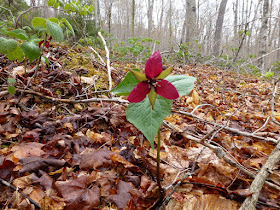 As we gained the ridge, it was snowing again and windy.  It felt like November, not mid-May.


First we went to the triple bumps at the north end of the ridge, then we went south along the ridge to the true summit.  There may have been some visibility on a clear day, but the snow squalls killed any views that might have been.  There were still no leaves on the trees, but once they leaf out, that will eliminate any views as well. 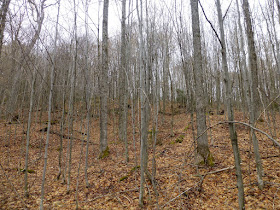 From the true summit, we continued south and found a descent route that took us back towards the south end of the pond where we took the herd path back to the car.