On this day I chose to climb another pair of peaks that would be new to me:  Eddy Mountain and Thomas Mountain.  This pair lie in the Hudson River Special Management Area of the Lake George Wild Forest.  They are near the Town of Lake Luzerne.  Don't confuse this Thomas Mountain with the one in Bolton.

I chose River Road as my access route and I parked at the first large parking lot (where road maintenance ends).  From there I continued north along the river on the unmaintained road to the next small pulloff.  There is a sign there indicating a foot path to campsite #6.  The same footpath also continues past Bear Slide waterslide on Buttermilk Brook and on to the Gay Pond Road.

I turned on this trail and almost immediately I saw the charred remains of a forest fire.  It realized that this fire was probably the fire that occurred on 4/23/16.  On that day, I was just to the north climbing Number 7 Mountain and I saw extensive smoke nearby to the south.

This fire occurred near campsite number 6 and went most of the way up the south side of Morton Mountain.  I don't know if the fire started from a spark from a campfire at site 6, or if it was from some other fire ring or cigarette butt.  I do remember that on 4/23, the ground was very dry and that a ground fire would spread quickly.

The fire damage ended right at the Bear Slide Falls.  This water slide is perhaps 300 feet long and is well worth a visit if you haven't seen it.  It is only 0.8 miles from the parking lot where I parked; even less from the parking spot for campsite #6.

I was on the trail early so the Bear Slide wasn't in the best light for photographs.  I was out in advance of the black flies, but they caught up with me about 9 AM on top of Eddy Mountain.


Above the Bear Slide water slide, I crossed Buttermilk Brook and climbed Eddy Mountain.  There is no real view from the summit, but a few viewpoints are nearby.


At the best viewpoint, south of the true summit, I found a memorial to someone who passed away in 2014.  There was a large flag and some objects fastened to a tree. 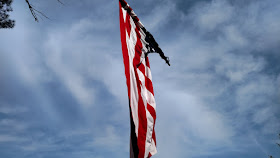 After the memorial, I headed for the ridge containing Thomas Mountain.  I crossed an old woods road along the way.  I headed to the south end of the ridge and then proceeded north.


I found the state land boundary running right along the top of the ridge and I saw several boundary markers along the way, in addition to the yellow blazes.

Thomas Mountain did not offer any spectacular viewpoints either, but the woods were open and inviting.  I did put on a bug headnet after leaving the summit of Eddy Mountain and it remained on my head most of the rest of the way (the price of hiking in May during the black fly season).

I thought the nicest part of the ridge was the north end; just due to the lush green grass in contrast to the trees where the leaves were just beginning to open.  I've included a few pictures from this area below. 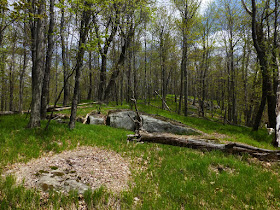 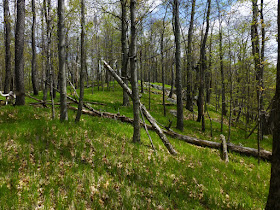 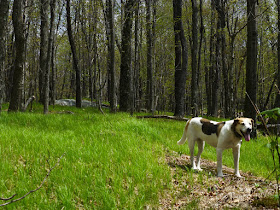 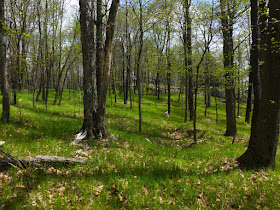 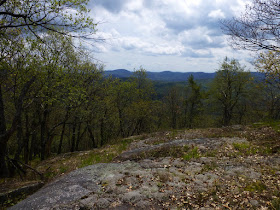 From the north end of the Thomas Mountain ridge, I dropped off the ridge heading NE until I came to the Gay Pond Road.  From there, I went back to the Bear Slide trail and back to the car.