For a 4th of July hike this year, Leesa and I chose the Nun-Da-Ga-O loop (also known as the Soda Range) in the Hurricane Mountain Primitive Area in Keene, NY.  This is a great 6 mile loop that offers a pond, 2 leantos, some nice open rock views from a horseshoe shaped ridge.  The loop is part marked trail and part unmarked herd path.  The unmarked portion is pretty easy to follow in the non-winter months.  You can get twisted around there in the winter if the trail hasn't been broken out.

Last year I did this loop in a clockwise direction and also incorporated an out-and-back trip to Hurricane Mountain.  This year we went in a counter-clockwise direction.  Our first stop was the almost new Gulf Brook leanto; just a 30 minute walk from the O'Toole Road trailhead.  It was recently relocated and rebuilt and now has been stained.  It's been moved away from Gulf Brook, but still have a drainage nearby for water.

Our next stop was Lost Pond.  It always looks very peaceful.

Just north of Lost Pond is the newly rebuilt Biesemeyer leanto which also has a fresh coat of stain.


After Biesemeyer leanto is the steepest climb of the day.  It's a short but steep ascent up to Weston Mountain.  Don't miss the view from the open rock ledge; it's just off the trail at the height of land.  I
think the view from Weston is the best of the hike, but it's tough to judge.  An awful lot of high peaks can be seen from Weston.

After Weston Mountain we were back in the woods on the unmarked trail until the mid-point of the hike when a nice stretch of rock ridge appears. 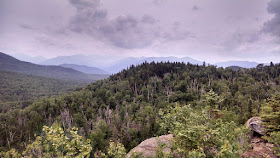 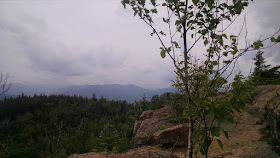 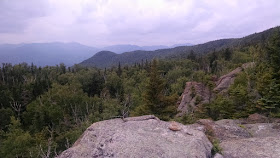 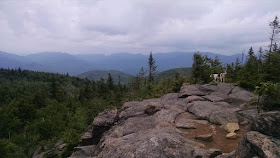 Near the end of the loop, we reached the junction with the trail to Big Crow Mountain and decided to climb the steep 0.2 miles to the summit of Big Crow, even though it was now starting to rain.  Big Crow is a great destination for a short hike with kids.  It's only 0.7 miles from the trailhead to the summit and it offers big views.  It's steep, but many kids like steep anyway.

We could hear rolling thunder and it was fun to watch the rain clouds moving in on us.  We stayed long enough to watch for a few minutes, then headed down before the steep rock sloping trail got slick from rain. 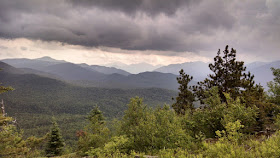 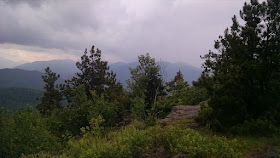 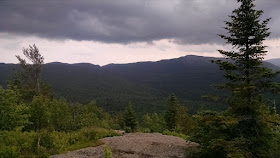 This hike is a nice alternative to the more crowded high peaks.  The loop has a lot to offer and we had another fine day here.