It was Leesa's turn to plan a trip today and she wanted to see the Long Pond Cliffs in the Siamese Ponds Wilderness.  I did a little research and we were on our way to the Town of Speculator where we picked up Elm Lake Road which we followed to near the end (just past the 6 mile marker) where the road branches left, right or straight.  To the right is a small parking area where we parked alongside two other cars.  There is a kiosk there for the Speculator Tree Farm.

First we took the short 0.5 mile woods road to a flooded portion of the Kunjamuk River.  There is a designated campsite there overlooking an old weir. 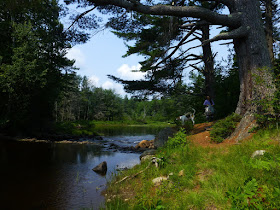 We then returned past the car and took the continued road north which now became a rougher section of road.  We shortly passed a camp on the right that had about 8 dogs chained to trees surrounding the house.

After 0.9 miles, we reached a fork where Long Pond Trail goes left and Kunjamuk Trail goes right. We went left to head for Long Pond where we would be able to see the cliffs to the east.

Along the way to Long Pond, we passed Rock Pond at the 2.1 mile mark.  There were 2 tents set up at a nice campsite on the east shore of the pond.  The trail up to this point had been pretty nondescript.

The trail began to get more interesting between Rock Pond and Long Pond.  At the 2.9 mile mark we reached Long Pond and could now see the majestic cliffs on the east side of the pond.   There were 2 nice campsites on the mid west shore of the pond.  The 1st one was unoccupied; the 2nd one had a woman camping there.  We talked with her for a couple minutes and she told us that there was now a marked trail at the north end of the pond that connected the Long Pond Trail with the Kunjamuk Trail.  We decided that we could take this trail and come back on the Kunjamuk Trail making a loop out of the hike.


Just north of the 2nd campsite is a peninsula where there was once an obvious campsite.  It now appears to be in the process of being reforested.  The penisula ends with a nice rock outcropping.


At the NW end of the lake, we reached the junction where the new trail went eastward to connect with the Kunjamuk Trail.  This was a 1.3 mile trail.  We turned eastward.  The trail passed over the north shoulder of the cliffs and we were hoping to find a herd path leading up the cliffs.  We didn't find one and Leesa didn't feel like bushwhacking to the cliffs at this time of the day.  I saw the spot where it seemed to be the ideal place to head for the cliffs and no path was found.  We decided to continue on and perhaps a herd path would be found later. 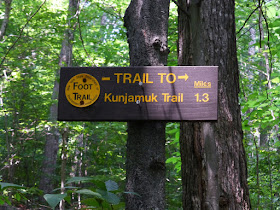 This new trail is well marked with yellow discs, but it is hardly a trail at this time.  The discs are needed to tell where the lightly trod trail goes.  We reached the Kunjamuk Trail without incident, then turned right to head south to return to the car.  We had 4.5 miles left to hike. 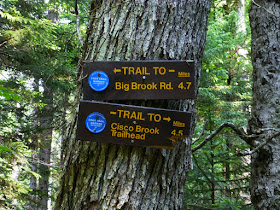 We is where the trouble began.  The Kunjamuk Trail was very overgrown and trail markers were scarce.  Our hound dog Rev knew where to go and that made it easier to stay on the trail.  We continued to wonder why the trail was not receiving hardly any use.

We soon discovered why.  We reached a big marshy area where we would have to cross the Kunjamuk River.  It wasn't much of a river at this point, but the trail discs vanished and we found ourselves in a marsh with chest high grass.  With each step we couldn't tell if the ground was going to support our feet or give way into a bog.


A log at the final water crossing gave us an exit from the marsh grass. 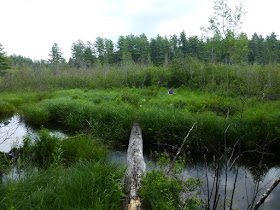 So this is why the Kunjamuk Trail was overgrown.  People hiking north on the Kunjamuk Trail turned around when they came to the marsh.  The trail was fine south of the marsh and we were able to march back to the car the final mile with wet squishy shoes and socks.


We rejoined the Cisco Creek Trail and noticed a benchmark on a rock alongside the trail that we hadn't seen on the way in.


If you go hiking in this area, we strongly advise against the Kunjamuk Trail.  Stick to the out-and-back on the Cisco Creek/Long Pond Trail.  That's what we'll do when we return to bushwhack to the top of the cliffs.