Back on 2/21/15, Leesa and I did an XC ski trip in the Essex Chain Lakes Tract where we did a loop ski of Fifth Lake through Eighth Lake.  At that time, we did not know about the new Upper Hudson Ski Loop, which starts practically in sight distance from where we started on 2/21.

After learning about the new loop I added it to my list of places to visit.  Today turned out to be the day.  My son Zack had the day off from work, so he and his dog Lulu joined me.  Zack was on snowshoes and I chose to ski.  Zack recently got Lulu and this was going to be her maiden hike.

We started from the designated parking area at around 10:15.  It was 28 degrees and warming up, so I put some glide wax on my skis.


The trail follows an old logging road a begins in a young hardwood forest.  At 0.65 miles, we reached the junction for the loop portion of the trip.  DEC has placed an arrow pointing right, and that is the way we went (although you can ski either direction).  The counter-clockwise direction is a little easier for the skier.

At 0.85 miles we passed a small vly.  At 1.25 miles we came to the biggest hill on the counter-closckwise loop and it was not difficult.  I went first so I wouldn't run over Lulu with my skis.


At the bottom of the small hill, we entered some pines and soon found ourselves alongside the Goodnow River.   We took a short detour off the trail to get a better look at the river.


At 2.0 miles, we were near the confluence of the Goodnow River with the Hudson River.  The trail turns north at this point so you won't see the confluence unless you leave the trail to look for it.  The forest returned to hardwoods and stayed that way for the balance of the trip.

At 2.4 miles, we could see the Hudson River on our right.  I wanted to get a look so we left the trail to go the short distance to the water's edge.  We had gotten quite warm by this point, but there was a nice breeze flowing down by the river and it felt nice.  (Spring must be coming if a breeze feel nice!).


Some spots on the Hudson River appeared frozen and some spots were open water.  We did not venture out onto the ice.  There was probably some solid ice, but I suspected some areas would just be snow cornices that would not support our weight.  There was no need to test it out. 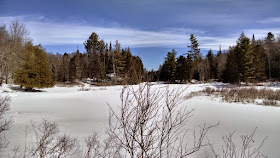 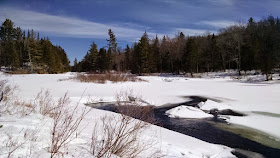 After the Hudson River we returned to the trail and followed it as it climbed away from the water.  At 3.3 miles, the trail intersects with another logging road the the marked trail goes left.  If you go right, the logging road descends 0.1 miles to a small bridge over a creek.  We went to this point, but then turned around and returned to the trail which continued to climb and began to turn in an easterly direction to close the loop.


Prior to closing the loop we reached the height of land along the trail and then began a gentle descent which returned us to the head of the loop.  It was now 35 degrees as we finished off the last 0.65 miles back to the car.  The snow had been a little sticky and it made the uphill sections easy to climb and I managed to kick the snow off to glide relatively well on the downhill sections.  This trail can be done by someone that is a high beginner or low intermediate level skier.  There is nothing too difficult under good snow conditions.  Best of all for us, Lulu did great on her first hike!

After having lunch with Zack and his fiancee' Hannah, I went back to Newcomb to ski a few runs on the Newcomb town ski hill.  It was untracked with fresh powder on top and I couldn't resist taking 3 runs down.  The hill is just 0.5 miles south of Route 28N.  The T bar was not running but I was able to easily herringbone up the hill. 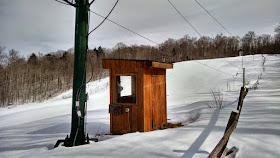 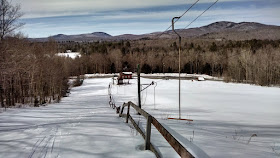 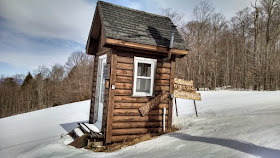