In all my infinite wisdom, I thought Averill Peak would be a peak I could summit even with a deep snowpack, since a communications tower access road leads to within about a quarter mile of the summit.  Wrong once again.

After spending a lovely morning XC skiing at the New Land Trust, Leesa and I headed over to the hamlet of Lyon Mountain to do an afternoon climb of Averill Peak via the access road.  First we parked at the wrong spot, adding about a half mile walk each way to our trip, no big deal.  We had parked at the end of School Hill Street, when we could have driven up Power House Road to the beginning of the access road.  From where we parked, we got to walk past the huge abandoned Power House building.

After a short walk, we gained the Power House Road and followed it up to the power building a water storage facility.  Here we saw 3 cars parked and talked with a man there who said that others were up on the access road skiing.

We began climbing and I was immediately saddened that I had not thought to bring my skis and climbing skins for this trip.  While occasional snowmobiles use this access road (we saw two), it is great for spring skiing or powder skiing.  We were following the ski tracks of several persons who had skinned up ahead of us.


While we were climbing I could tell that there was close to 2' of snow on the ground in the woods.  Still, I expected I could trudge through a couple feet of powder for 0.25 miles to get from the sub-summit to the true summit.  Perhaps it would even be broken out by previous snowshoers. 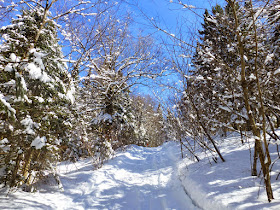 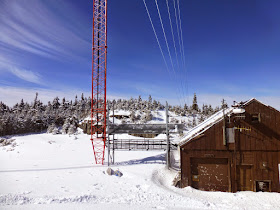 I started scouting around at the tower looking for a track or a seam in the trees heading SE,  I had no such luck.  The spruces were tight and full of snow.  While still within sight of the tower, Leesa fell in a spruce trap to her waist.  I helped get her out.  That was enough for her to decide she was done.

I still hoped I could find a way through the trees, but the minefield of spruce traps was too great a risk to take.  If I were alone, and fell in a spruce trap and got stuck, it would not be a good scene.  It's one thing to fight deep powder, but it's another to not know whether the floor will fall out below you.  Decision made... I would turn back.

I don't mind having to hike this mountain again.  The only snag is the long drive to get here for me.  I'll return in a different season for the hike, and maybe, I'll return in the winter to ski this route.   This was certainly a beautiful weather day and we had great views from the sub-summit.  It would have been a fun run down on the skis with these spring conditions.  We saw 2 guys skiing down and they were having a blast. 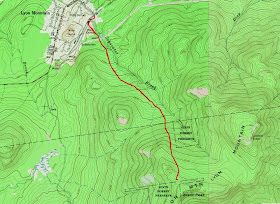