My task was simple; find a hike in the vicinity of Keene Valley that would take 3-5 hours and offer fantastic views.  I had 3 friends coming up Saturday morning who were staying overnight at the Aubable Inn in Keene Valley.  They hike 1-2 times a year.  The options I came up with included Hurricane, Hopkins, Round, Noonmark, Blueberry and Roostercomb.

Hopkins and Hurricane were at the top of my list.  The deciding factor ended up being the extreme cold and wind.  I eliminated Hurricane since I knew the summit would be quite windy.

We met at the Noonmark Diner at 9 AM and had breakfast.  Afterwards, we parked the cars at the Roostercomb trailhead.  I chose the Ranney Trail as our route of choice.  Just so you know, this route is not obvious. You walk in on Ranney Road, which is diagonally across the street from the parking lot.  The road sign says it is a private road, and there is no indication that that there is a trail there.   You have to walk straight in on Ranney Road for a quarter mile or so before you see an old sign pointing to Hopkins.  See the picture below which shows the sign. 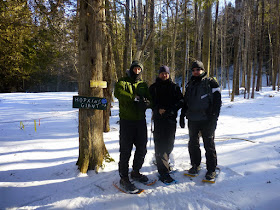 I was quite surprised by the lack of snow.  There was only an inch of snow on top of some icy crust. The group did not have microspikes, but I had brought snowshoes for all.  We put them on at the first trail sign, but we banged them up a bit in the beginning due to the lack of snow.

As we climbed out of the pines into the hardwoods, the snow was deep enough to make the snowshoe walking much more comfortable. 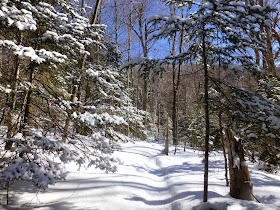 The Ranney Trail is well sheltered and we were unaffected by the wind.  As we reached the junction with the Mossy Cascade Trail, we discovered fresh hiker tracks.  Soon we found the source; a pair of Canadian hikers wearing crampons.  They were stopping for a break and we passed them at that point.

My group was doing OK.  They were whining a little bit, but it was more out of fun than agony.  They weren't used to climbing 2000' in snowshoes, so they let me hear about it.


The snow depth continued to increase, but there was still only a foot or so on the ground.  That certainly has changed as I write this.  Another foot fell today. 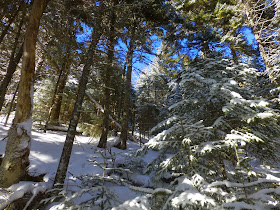 The big surprise of the day came when we reached the open summit where we were treated to sunshine and no wind!  I was redeemed by my friends.  They raved about the views and more or less forgot about their climbing woes.  We all sat down on the summit and had some lunch. 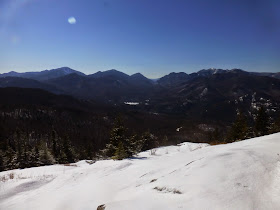 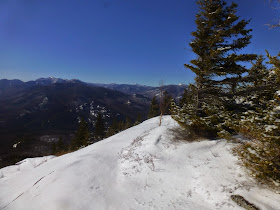 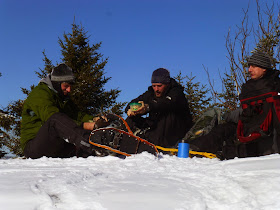 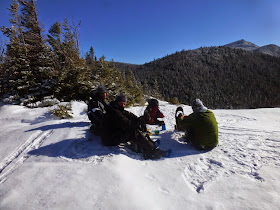 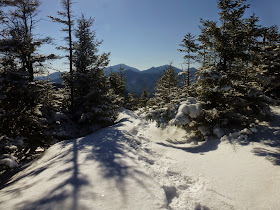 We returned to the car via the same trail.  The group had stopped their whining and they were now joking and having fun.  Our 2 hour climb equated to a 1.5 hour descent.  The 30 minutes on the top gave us a 4 hour trip which worked out perfectly.

We completed the day with a few beers at the Ausable Inn and all was good.