I try to make an annual pilgrimage to the Tongue Mountain Range in winter.  Last year, I went on New Year's day in beautiful fluffy snow conditions.  This year, I sent on Sunday and I was exposed to a variety of conditions.  The snow pack was old and crunchy.  The sun drenched south facing slopes revealed more grass than snow, and the north facing slopes were cold and windy.  Some spots were icy.

The early morning hours were spent doing some projects for work, which translated into a 10:30 start at Clay Meadows on Route 9N.  There are only 2 trailheads (by land) to the Tongue Range.  The other one being at the northern terminus of the Tongue Range, much further north on Route 9N.

My goal on Sunday was to hit Firth Peak, French Point Mountain and First Peak (all peaks with great views).  Once I reached First Peak, I knew it would be early afternoon,  If I bushwhacked to Northwest Bay from First Peak, I could eliminate the trek to Montcalm Point and save a couple miles. I don't normally look to eliminate miles, but I wanted to finish before dark.  As partial bushwhack would also mix things up a little.

It was a frigid morning even though it was a late.  I normally dress light and adjust my pace to keep warm.  This meant a quick pace due to the cold.  As usual, Rev was OK with this.  We gained the ridge in less than an hour and made the Fifth Peak lean-to in one hour.  We passed 2 groups along the way and that that was it for humans for the rest of the hike. 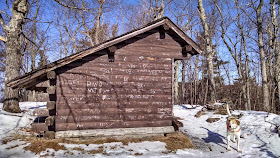 The section of trail between Fifth Peak and French Point Mountain is 2.3 miles, but it feels longer. There are 3 unnamed bumps that you have to go over and psychologically it wears you down.  I'm always surprised at this.  Maybe next time I'll remember.


Since last year's trip, a lot of limbs have fallen on the trail.  A good day or two of trail work is now needed to clean up this trail. 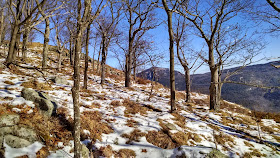 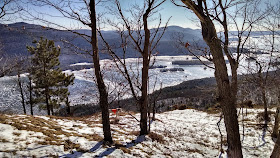 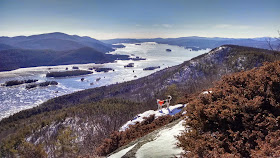 The traverse from French Point Mountain to First Peak is a shorter one (1.4 miles) and is less rugged than the first leg of the ridge.  The views continue to amaze me as I move along on this ridge in winter.  The lake is totally quiet in winter which is probably why I chose to do this hike this time of year.  Summer motorboat traffic isn't so appealing to watch, 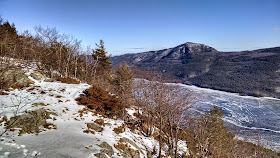 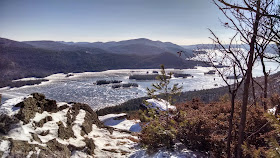 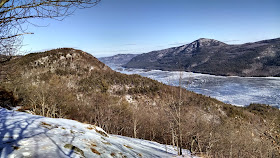 From First Peak, I began a bushwhack NW towards the Northwest Bay Trail and a return to Clay Meadows.  It had taken 3 hours, 15 minutes to get to First Peak.   I wanted to shave some time off on my return.  The snow depth was such that I could continue to wear microspikes off-trail.  I picked my way through the forest, finding easy walking by weaving around obstacles.

I reached the NW Bay Trail just north of Bear Point.  This left me a short couple miles back to the car for a 3:30 return.  Another annual pilgrimage complete. 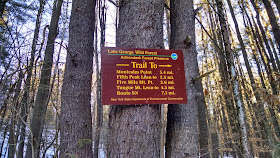