We were once again blessed with great weather.  The forecast was for mostly cloudy skies, but we had a good deal of blue sky all day long.  Temps were in the low to mid 20's. 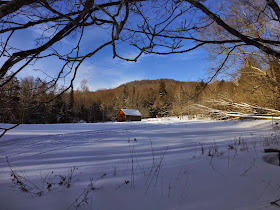 After parking on Whiteface Inn Road, we followed Bloget Road to where the trail begins on the left side just prior to a metal gate on the road.  This is the Lake Trail, which we followed until the junction with the Twin Ponds Trail.  There was about 6" of fluffy snow on the Lake Trail.  After .5 miles, we reached the fork where Bartlett Pond Trail bears left, and Twin Brook trail bears right.  We took the left towards Bartlett.

As we climbed towards Bartlett Pond, the snow got deeper, as expected.  The trail changes to a moderate grade.  The snow was still clinging to the trees and the sun was shining.  We were plenty warm as we climbed.

We ran into one one hiker was had gone a far as Bartlett Pond, and slightly beyond, before heading down.  He told us no one had broken the trail above that point. 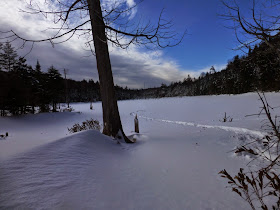 We had some snacks at Bartlett Pond, then geared up for the final push to the top of the ridge.  I found were the lone hiker had turned around and the the trail breaking began.  I had given up hopes of climbing both McKenzie and Moose, but knew I could tackle McKenzie by itself.


Leesa told me to push on with Rev and she would follow at her pace.  We only had 0.8 miles to go.
I thought she would be right behind me, but I gave her a radio just in case.  It turned out that, even with my trail breaking, I was climbing a bit faster than she was.  Rev and I reached the ridge and she was still halfway up.  I continued on to McKenzie and took a series of pictures from the 2 summit viewpoints.


My picture of the summit disc came out a little blurry, but I had to include it in the picture set.

There was some nice rime ice on the trees at the north facing overlook. 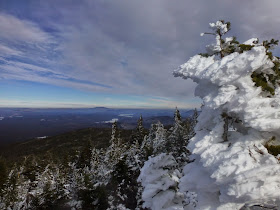 I radioed Leesa from the top and said we'd come down to get her.  She interpreted that to mean we were headed down, so she turned around.  I had meant to meet here and then reclimb.  Oh well, she didn't care either way.  Rev and I caught back up with her before Bartlett Pond.

The walk down was a joy on freshly packed powder and glistening snow.  We got back to the car at 1 PM and decided to go over to the Peninsula Trails in Lake Placid and hike those for a couple hours, but I'll put that in the next post.