Today we did an afternoon adventure in the Hammond Pond Wild Forest.  We started by taking the short 0.6 mile trail from Ensign Pond Road to Chalis Pond.  This was another trail that we had never bothered to stop and hike.

No one had signed in the register since December 2nd, and we didn't see any tracks in the snow.  No matter, there was only a couple inches of snow on the ground.  As we hiked in, we cleared quite a few small limbs that had fallen in the trail.

We arrived at the pond to find a fire ring and two aluminum rowboats that looked seaworthy.  There was also a pair of oars there (not that we could use them in the winter).  We noted that in the guest register, someone said thank you for leaving the boat at the pond, and that they had taken a nice paddle around the pond.

After seeing the pond, we bushwhacked over a unnamed hill to the east and continued down the other side until we came out to the another trail that leads to Bass Lake and Moose Mountain Pond.  We have been to both of those locations before, so we headed back to the car to continue on to our second destination.

For hike #2, we split up to do different things.  We had continued east on Ensign Pond Road and parked at the trailhead for trail # 114 on the National Geographic map.  This is a trail form Sharp Bridge State Campground to Ensign Pond Road.  It passes Round Pond and Trout Pond along the ways.

I had skied this trail before, but Leesa hadn't been on it, so that is where she headed.  I crossed the street and began a bushwhack up Harris Hill.  I could tell from the road that Harris was quite open for most of the mountain and that it would offer nice views.

The trickiest part of this bushwhack was the first five minutes.  I had to maneuver around several bands of small cliffs and large boulders.  After that, the going was moderately steep, but easy walking through open forest and clearings.


It took me about 45 minutes to climb the one mile up the slope to the summit ridge which consists of 3 small bumps.  The first thing I noticed was that the wind was noticeably stronger as I climbed.  The second thing I noticed was that I did indeed have great views to the north and to the west of the Giant Mountain Wilderness and the Dix Mountain Wilderness.  In the pictures below, I haven't yet figured out which mountains I was looking at, but the views were nice.  I'll be studying my pictures and the map to see if I can identify what I was looking at!

As I climbed, the 3" of wet snow turned into 8" of fluffy snow which was also still stuck to the trees.
The first summit offered the best views to the north and northwest. 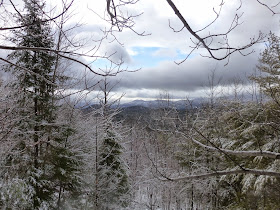 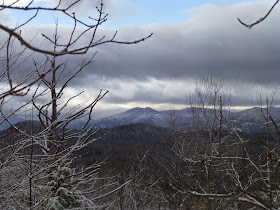 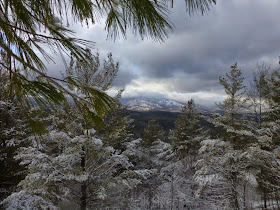 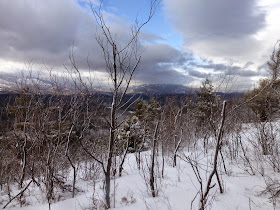 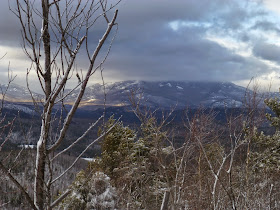 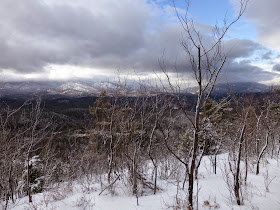 On my way to the 2nd summit bump, I noticed my dog Rev was lagging behind (which is very unusual).  The next thing I noticed is that she came trotting up to me carrying the remains of a rabbit. All that was left of it was the rear feet and part of the rear end.  She set it down for a minute and I put it up in a tree limb so she could no longer carry it around.


It only took minutes to traverse all 3 summit bumps.  I really liked this area, especially in the snow and the wind with the interesting skies.  It felt very remote, even though I was only 1 mile from the car!


I've included a bunch of pictures showing the different views that I was rewarded with.  From up on the summit, I was able to communicate with Leesa via our 2-way radios.  We were only a couple miles apart and had no problem hearing each other.  When I was ready to head back, I just followed my tracks back.  I let Leesa know I was on my way and 45 minutes later we were both back at the car.  Perfect timing. 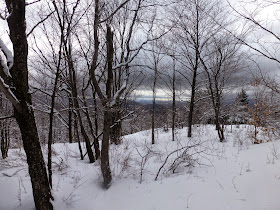 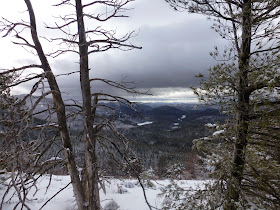 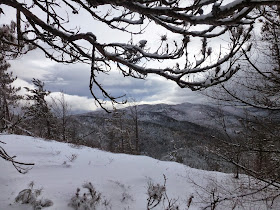 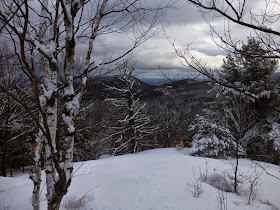 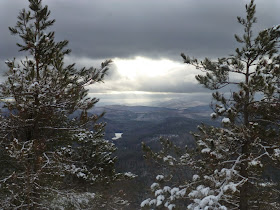 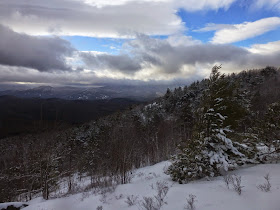 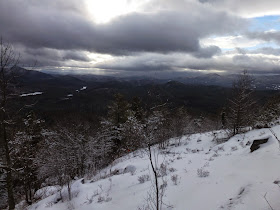 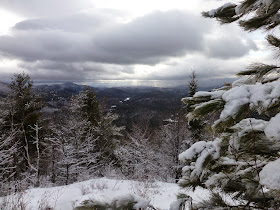