Today Leesa and I were in the vicinity of New Russia and Elizabethtown and we found a nice pair of short bushwhacks that were relatively easy and each offered a great view.

The first was Split Rock Mountain in the Hammond Pond Wild Forest.  On the east side of Route 9 in New Russia, just south of Split Rock Falls, there is an old jeep road with two large rocks placed near the entrance to prevent motor vehicles from entering.  We parked off the shoulder and began our hike.

The jeep road is in excellent shape for the first .3 miles, at which time you arrive at the remains of a view old foundations and a stone wall.  We continued on the jeep road continued, but with a few trees across the old road.  At .5 miles, the jeep road hooked left and began to go slightly downhill.  This is where we turned right to bushwhack eastward up Split Rock Mountain.

We had filtered views of Giant and Rocky Peak Ridge to the west in the Giant Mountain Wilderness.

At 1.25 miles and 1000' vertical, we took on top of Split Rock Mountain.  There is a small cairn marking the top.  We still had filtered views to the west, but then the leaves are on the trees, those views would be gone.  The climb had been mostly through hardwoods and the summit was the same.


From the summit, we could see a slightly higher mountain just a short distance to the east.  We weren't sure if it was considered the other part of Split Rock Mountain, so we decided to head that way.  We could see more pines and many rock outcroppings on the eastern peak.

We dropped into the col between the 2 peaks and as we began to climb, the eastern peak was indeed quite different.  It was a bit more rugged and we skirted a little north to have easier access to the top.  The peak was shrouded mostly in the pines, but there was a hardwood ridge at the top. 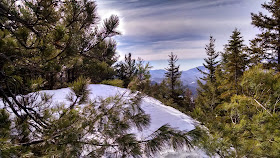 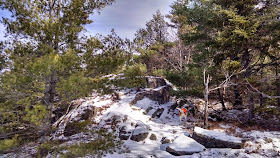 On the way back, we bypassed the summit of Split Rock Mountain by contouring around the southern side of the summit.  We soon reconnected with the old jeep road and finished retracing our way back to the car. 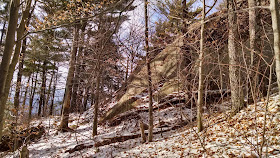 It was only 1:30 at this point.  We stopped at Stewart's in Elizabethtown to grab some food, then we headed east on Route 9N 2 miles to a small piece of State land encompassed a hill named Green Hill. This parcel is also in the Hammond Pond Wild Forest and lies immediately west of a DOT facility, and is midway between E-town and I87 Exit 31.

Once again, we parked off the shoulder of the road across the street from a duplex apartment house. There is an old jeep road that heads south toward Green Hill that runs along the fence of the DOT property. Once past the DOT property, we crossed a utility ROW, and continued to follow an old jeep path.  At the height of land on the jeep path, we left the path to turn SW towards the eastern ridge of Green Hill.  We followed a faint herd path and as we began to climb, we found a climbing rope attache to a tree to assist in ascending a steeper section.

Next we continued upward through scrub and mossy rock slabs.  We began to get some nice views to the east.  We could see past I-87 to Lake Champlain which lies about 6 miles east of Green Hill. 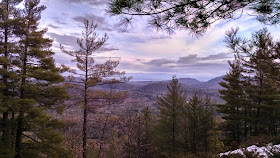 Just as the grade began to taper near the summit plateau, we came across a small hunters shelter and a fire ring.  This was just above the nice viewpoint in the picture above. 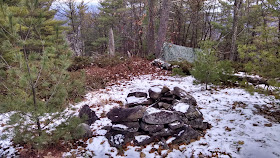 I was expecting the summit to be thick pines and softwood, but it was rather open with oak trees, some pine and scrub.  We followed the ridgeline west to the true summit.  A small cairn marked the location. 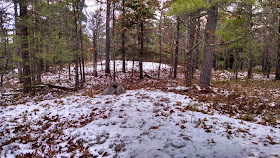 Unfortunately, from the summit, I was able to receive email.  Folks from work were trying to get in touch with me to have me send some files out, so we descended more quickly than we would have otherwise.  Even though this parcel of land with Green Hill looks rather small on the map, it provides a nice hike, with a nice view.  We made a loop out of the hike and we did the trip in less than 2 hours.