Sunday wasn't a bluebird day near Indian Lake, but is was nice enough to get out a climb a pair of peaks on the ADK Hundred Highest list (102 highest).
My dog Rev and I traveled to the trailhead for Chimney Mountain, just east of Indian Lake to climb Puffer Mountain and Bullhead Mountain.  I wasn't sure I would have time for both, but I was hopeful.  We got started around 8:30.
I decided to tackle Puffer first, since that was the longer hike of the two.  If time permitted, we'd head for Bullhead. ﻿
I followed the Puffer Pond trail for the first 2.4 miles to the Puffer Pond leanto.  Rev and I covered that section of trail in 50 minutes.   I noticed that there a few handtools in the lean-to:  a hatchet, an axe and a handsaw.
﻿ 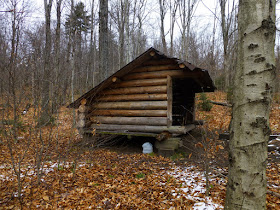 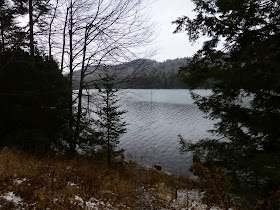 From the lean-to, I turned SW to hike past the southern end of Puffer Pond.  I saw a makeshift shelter along the way.


Once past the pond, I hopped over the outlet and  turned SE to begin the climb of Puffer.  I was fortunate, in that the route I chose ended up being quite pleasant with very little thick spruce of obstructions.  I did encounter a fortress of rock, 0.3 miles from the summit, but was able to skirt west a short distance and find a way up. ﻿ 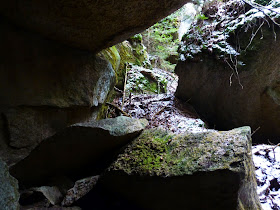 The very top of Puffer is moderately thick and it took a little time to determine what I thought to be the true summit.  I spent 20 minutes making sure I hadn't missed it.  I poked around and took a few pictures where I could find an opening in the branches.
﻿
﻿


On the way up, I had encountered the snow line at about 2000'.  At the summit, there was perhaps an inch of snow.  It was just below freezing and there were occasional light snow flurries.﻿
The route up had been pleasant so I decided to just follow my tracks back down (why tempt fate).  When I returned to the Puffer lean-to, it had only been 3.5 hours since the start, so I made the decision to head for Bullhead Mountain.
To access Bullhead, I backtracked further to the John Pond trail, turned north, followed the trail for a little less than half a mile, then turned east to go straight up the western slope.
﻿


The first half of the slope was hardwoods, then it turned to spruce.  I encountered some moderately thick spruce on and off as I climbed.  The summit of Bullhead was much more obvious than Puffer, as it was a well defined cone summit.  There was a orange ribbon on a tree at the location. ﻿
﻿ 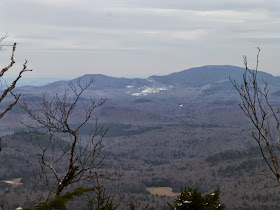 Bullhead had a few more views than Puffer, but still not a lot.

To return to the car, I took a slightly different route down the west slope, but it wasn't much different from the route I used for the ascent.  I regained the John Pond trail and retraced the trail back out.
﻿ 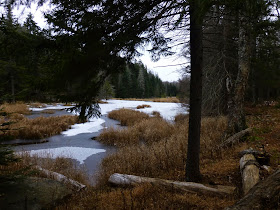