This outing was planned by my wife Leesa who is closing in on finishing her Adirondack High Peaks.  She had 43 out of 46, with just Cliff, Redfield and Couchsachraga left.  She had decided long ago that she wanted to finish on Couch, so Cliff and Redfield, being neighbors, were the goal for today.

The weather forecast was good with increasing sunshine predicted.  We got on the trail at 6:30 AM from Upper Works.  I had told her that this would be an 18+ mile day and she preferred to start early rather than finish late.  She hadn't done many hikes recently that were this long, so the plan was to go slow and steady and not burn out too soon.

By 8:30 we were at our adopted lean-to at Herbert Brook, and we stopped to check on it.  Then it was on to the Lake Colden Dam.  We only saw 4 groups of people all day.  One couple was near Flowed Lands and the other 3 groups were near the Colden Dam.  We didn't see anyone along the Opalescent or on Cliff and Redfield.  We had thought we would have seen a lot of people since it was a holiday.
I lifted Rev down the ladder to the Colden Dam by her Ruffwear harness.  (It has been great for that purpose).  Soon we were a the suspension bridge.  The water level was lower than I had expected.  That turned out to be OK, since it made the trail to Cliff less muddy.


It was nice to have some clouds in the morning while we were climbing.  The sun came out shortly before we reached the summit of Cliff.  We had chosen to climb Cliff first to save the best for last.   ﻿


The mud on the lower section of the herd path to Cliff wasn't nearly as bad as it usually is earlier in the season.  I managed to keep my feet dry all day in my trail runners.

The cliffs on the mid-section of Cliff were challenging as always, and Leesa wasn't a big fan of them.  She was glad on the way down when they were behind us.

We reached the summit around 11 AM and skies were clearing.  The humidity wasn't bad and we had no issues with bugs all day.
﻿

She did begin to wear down from the climbing as we neared the halfway point going up Redfield.  We just slowed our pace down and she focused on putting one foot in front of the other to reach #45. ﻿ 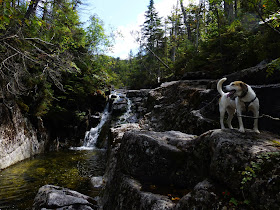 It was about 3 PM when we reached the summit of Mount Redfield.  The weather was perfect and we were really enjoying Redfield.  We stayed there awhile to eat our late lunch.

Around 4 PM we made our last stop to soak our feet in Uphill Falls Brook and then it was time to make tracks to get out by dark.  We passed the Lake Colden dam around 5:15 and Flowed Lands around 5:45.   We got great pictures from both those spots.
﻿


Leesa was a trooper as we made our way back down the Calamity Brook Trail.  She knew the sooner she got back, the sooner she could get off her feet.  We managed to get back just as darkness was setting in.  We gave Rev her dinner right there in the parking lot and she was asleep before we even got back to Blue Ridge Road.     ﻿