Today's weather wasn't much to brag about (warm, muggy, rainy), but I was in Long Lake bringing a kayak to my son Zack, so we took some time to do a few short hikes in the area.
First up was Goodman Mountain (2162') at the southern end of Tupper Lake.  This trail was just opened this month by the Department of Environmental Conservation.  The trail boasts an accessible portion (1400' long) on an old paved road, followed by a moderate grade on the old paved road, and lastly a newly constructed foot path to complete the trek to the summit.
Also it was raining lightly, we saw perhaps 20 people on the trail; perhaps it was the holiday weekend, or the fact that it is a new trail.  We saw a woman with crutches on the accessible portion.  We also saw a couple that had biked the accessible portion, then hiked the rest.     ﻿
The accessible portion was a quick hike for us and took perhaps 10-15 minutes.   ﻿ 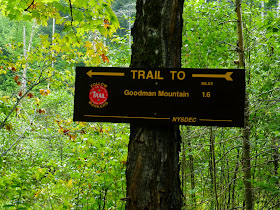 The newly constructed trail portion was a moderate grade.  Then were a couple slick portions that were muddy due to the rain, but we were on the top after 30 minutes from the time we left the car.
﻿


The rain stopped just before we reached the summit.  We were fortunate to have some visibility.  What surprised me was that that was no view of Tupper Lake.  It is blocked by trees on the north side of the summit.   We wandered around a little, but didn't see a viewpoint looking north.
Views are limited to looking mostly west and south. ﻿ 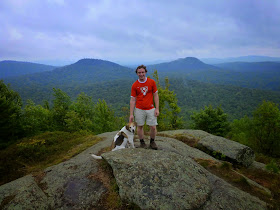 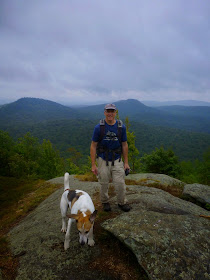 The rain did not return as we descended so we got back to the car mostly dry.
﻿
Hike Stats:
Hike Distance:  3.2 miles roundtrip
Hike Time:  1 hour, 10 minutes
Total Vertical Gain:  ~ 530'
﻿
Hike Part 2
Since Coney Mountain (2267')  is located just a couple miles south on Route 30 from Goodman, we headed that way to climb a 2nd small peak.  The open rock summit of Coney is visible from several locations on Route 30 on a clear day.  I had driven past it many times, but had never stopped to check it out. 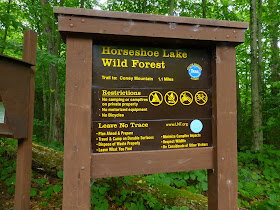 Once again, we saw several groups on the trail.  Not quite as many as on Goodman, but we still saw 3 groups.  We didn't get any more rain and we made quick work of the 1.1 mile trail to the summit.  I believe this trail has been re-routed from it's original short .5 mile trail to a longer 1.1 mile trail that now circles clockwise around to the SE side before climbing the ridge to the summit. ﻿

Coney has a pretty awesome summit, with open rock and 360 degree views.  It would be a great place to hang out for awhile on a nice day.  Long Lake is visible to the south. 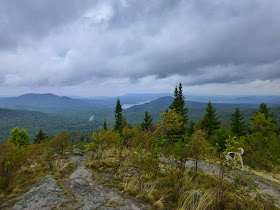 We saw hooks remaining in the rock from a weather station or previous﻿ structure that no longer exists. 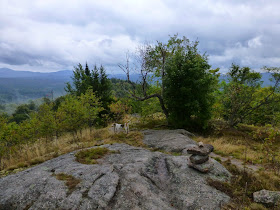 These hikes make for great after work hikes or chances to stretch your legs while passing through.
Coney is especially nice and I'm sure I'll do them both again in the future.
Hike Stats:
Hike Distance:  2.2 miles roundtrip
Hike Time:  50 minutes
Total Vertical Gain:  ~ 530'
﻿