My primary goal today was Sheperd's Tooth, and I didn't want it the conventional way (from Iroquois Mountain).  I wanted it from Cold Brook Pass.  I knew it wouldn't be easy.  I had been thwarted previously (last October with my dog Rev).  This would be a solo trip; not even the dog was going with me.

It was 42 degrees when I got started from Upper Works.  The forecast called for partly sunny skies with the chance of afternoon showers.  I was on the trail at 7:30 heading for Indian Pass.  This was also my route last year.

﻿
I made good time, getting to Summit Rock in Indian Pass in 2 hours and the junction with the Cold Brook Trail in 2.5 hours.

The Cold Brook Trail has some nice water pools in the early part of the trail form Indian Pass Brook.  I stopped at each of them to take some pictures.  They would be nice swimming holes in the warmer weather.  Speaking of weather, I wasn't getting any sunshine, and it fact the wind was picking up and I thought it might rain.

It took me an hour to climb the 1.8 miles to the height of land in Cold Brook Pass.  I went past the cairn to Marshall on the right, just a short distance west of the height of land.  I had hiked this herd path last year.

At the height of land (7 miles into my hike), I found a small cairn on the north side of the trail.  I went in the woods here looking for a route up the cliff band that guards Sheperd's Tooth.  I didn't find one so I came back to the trail and went a little further east.  In fact the trail was starting to drop towards Lake Colden at this point.  Looking up, it seemed that the cliffs were negotiable at this point.

I wasn't sure what my plan would be once I was on the Tooth.  It depended on the effort to get there.  I soon found out what that effort would be.  It was thicker than hell.  I was determined though.  There were no cliffs here, just really thick cripplebrush.  It took me an hour and 20 minutes to climb the .3 miles to the Tooth!  When I was about 10 minutes from the top, clawing my way through, I found a small pocketknife.  It didn't look like it had been there that long.  If anyone lost it, describe it to me and I'll get it back to you.

As I was crawling up the hill the sun finally began to make an appearance.  Finally I made it to the top.  I had only been there about 3 minutes when "NikeUSA" from the ADK High Peaks Forum appeared.  I had read that he was planning to hike to Sheperds Tooth this weekend from Iroquois, but I didn't know what day.  It was quite a coincidence.  We chatted for a few minutes and then I decided to continue upward to Iroquois (I didn't want to go back down the way I came up).


As I emerged from the Sheperds Tooth herd path onto the open rock on the side of Iroquois, I ran into "Mamamac", also from the High Peaks Forum.  She was with several other folks; one of whom told me how to get to the plane wreck on Mount Marshall!
In no time I was on the summit of Iroquois, one of my favorite high peaks.  Several other folks were there taking a rest and enjoying the view.  I decided I would take the trail from the Boundary/Algonquin col down to Lake Colden, and if I had enough time, I would ascend the Cold Brook Trail from the east to go and look for the plane wreck. ﻿ 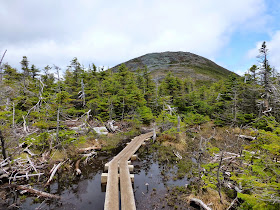 It took me just over an hour to go down to Lake Colden.  The water along the way was fantastic as always.  I passed 5 groups on their way down and 2 groups going up.  I was surprised by the amount of people on this trail, but I guess its the only one up to the MacIntyre Range from the Lake Colden area.
It was 2:30 when I got to the Interior Outpost.  I decided to go back up Cold Brook from the east to find the plane wreck.  I was told it was about 2/3 of the way up to the pass.  I kept stopping to scout around but found nothing.  Finally at 3:30 I found it.  It is just east of the height of land, behind a large boulder that sits 10' off the trail on the Mount Marshall side. If you walk behind the boulder, you will see it.  It is just a 100 yards or so off the trail.  There is a description of what happened here if you scroll down a little ways.  The accident happened August 9, 1969 and the plane is a Cherokee 140.

I had forgotten how rugged this herd path to  Marshall is.  I was starting to get a little tired at this point.  At 4:30 I was on top of Marshall.  It was now time to high tail it down to Flowed Lands and out the Calamity Brook Trail.

I passed several groups going down Marshall (including a 3rd member of the High Peaks Forum, YanaLG).  Nice meeting you.  There were also a couple groups climbing who had to be camping in the area.
I reached the Herbert Brook lean-to (my ADK adopted lean-to) at 5:40 and gave it a quick inspection.  The were 3 people taking an afternoon nap in there.  They had gone to see sunrise on Mount Marcy this morning and were now catching up on sleep.
Next I made quick work of the Calamity Brook Trail and signed out at exactly 7:30 PM.  Same time that I signed in.  My last goal was to get back to Schroon Lake and catch some dinner before the restaurants closed.  I was successful!
My journey to Sheperd's Tooth is now complete.  I ended up covering a lot more ground than I expected to today, but it was a great day.  There were no bugs.  While walking though the re-route section of the Calamity Brook Trail, I was really enjoying the perfect weather at the end of the day.  More pictures can be found here on my Picasa Web Album.
Hike Stats:
Hike Distance:  19 miles
Hike Time:  12 hours
Total Vertical Gain:  ~ 5500' 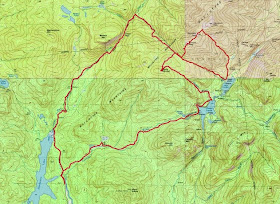