Jay Mountain in Upper Jay, NY is worth a hike at any time, but today we went there to enjoy some fine early fall weather and to check out the re-route of the lower portion of the trail below the beginning of the ridge.


Jay was actually our backup plan.  We thought that if we could snag a parking spot at the Garden in Keene, NY, we would revisit Big Slide Mountain via The Brothers, but no such luck.  We didn't arrive at the Garden until 9 AM, and we suspect the lot was filled long before then.  No worries, Jay Mountain is as good a backup plan as you can find.

We got to the Jay trailhead around 9:30 AM.  There were about seven cars already parked alongside the road.  As we got out of the car, we were warned to have the car fully off the edge of pavement, or we had a good chance of getting a ticket with associated fine of up to $150 for parking on the pavement.  We heeded the warning and moved the car a couple inches to get it off the pavement.  The warning came from Christine Bourjade of the ADK 46-r organization who happened to be hiking Jay as well on this day.  She was hiking with Pete _____ (sorry, I don't know his last name) who I have already seen twice on the trail in the last year, 1st while heading for Street and Nye last December, and in February in the col between Blake and Colvin.


Anyway, we signed the register and headed up.  Just two months ago, or so, the Jay Mountain trail was re-routed below the ridge to alleviate erosion problems caused by improper trail layout.  See the DEC discussion on the topic.  The original trail basically went in a straight line right up to the ridge.  I never had a problem with it, nor did I notice any erosion problems, but I'm not an expert on trail design.


After 10 minutes and a quarter-mile, we came to where the old path was blocked off with branches, and the new path swung to the left.  We took the new trail to see how it was laid out.  Whereas the old trail went pretty much due east to the ridge, the new trail curves generally NE, then SE before crossing the old path, then North NE to reach the ridge just east of the western end of the ridge.   There are probably 15-20 blue trail discs that have been placed on the new trail.  As we reached the ridge, we noticed that they did put in a short spur to see the viewpoint from the western end of the ridge which was now bypassed if you did not take the spur.


We got to the ridge and basked in the sunshine.  It was a beautiful day.  This was the 1st time Leesa had been on Jay without snow on the ground, so she enjoyed the opportunity to linger and stroll on the ridge without getting cold.  The ridge runs for approximately 1.5 mile to the summit.  It is open rock for more than half of that time providing excellent views of the high peaks to the SW (with Whiteface and Esther due West).  To the East and NE, Lake Champlain is clearly seen on a clear day.


We continued along the ridge to the summit.  The herd path along the ridge is unchanged and is generally on the south side of the ridge (right side as you are heading for the summit).  There are a series of small cairns along the way.  The path is narrow, but generally can be followed without too much difficulty.  When we reached the summit, we were rejoined by Christine and Pete who caught up with us while we lingered at the top.  We could see several other groups of people at various times and points along the ridge. 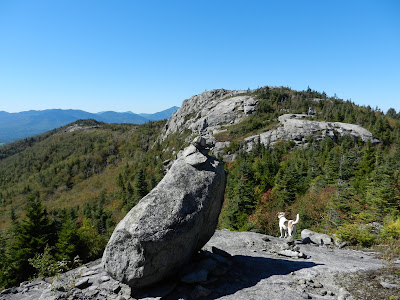 One of the things I was doing on this trip was a little reconnaissance for a future bushwhack trip to Arnold Mountain.  It's open rock summit is easily visible about 2 miles north of the Jay ridge.  There are several other un-named bumps along the way to Arnold that also have some open rock. 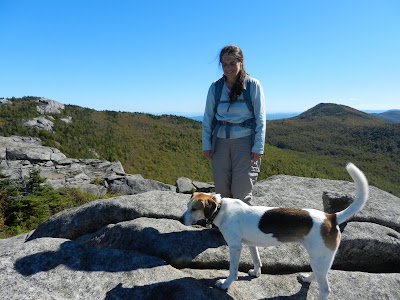 Shortly after beginning our descent, we ran into "Master Grasshopper" and his wife from the ADK High Peaks forum.  We stopped and talked to them for a few minutes and they gave us some great ideas for bushwhacks in the Dix Mountain Wilderness Area.  Thanks, and nice meeting you!

Once we left the ridge, we descended on the old herd path and returned to the car.  As I've reported in earlier posts, Jay Mountain is not to be missed.  It is truly a fantastic ridge that provides almost constant views,  There is also interesting rock all along the way.

I've never failed to see a rock figure on Jay Mountain.  I don't know who makes them, but they are creative. Watch for them...

There is no place to get water on this hike, so be sure to bring plenty with you.