A nice feature of our camp is that we can backpack from right out our back door!  Leaving the comforts of camp for a tent feels great in the early fall.  The Hoffman Notch Wilderness doesn't see much use, but we love it.  30,000 acres and I think I've only ever seen a couple people there.
﻿


On this day, we headed for Big Pond, where we have a favorite spot to camp.  It's about a 2.5 mile hike from camp and it's part bushwhack, part trail.


We didn't head in until about 5:30 on Friday night, but we had plenty of time to get to our camping location, have some dinner and get our fire going.
﻿

Rev got to have her 1st ride in a rowboat, and she did pretty good.  She didn't try to jump out!  Once in a while, she would get in the way of the oars, but oh well.
﻿ 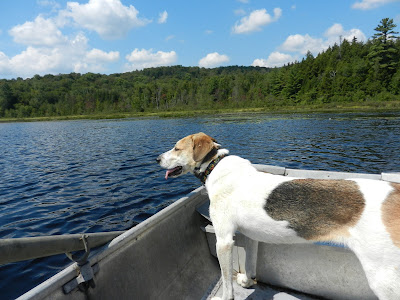 We had the most relaxing evening.  Not a person or a sound could be heard.  It was the perfect night for camping.  Not cold, not humid and no bugs.
﻿

It was a simple night of just relaxing and having a campfire.  At the end of the night we squeezed into our two person backpacking tent... with the dog.   It was her 2nd time being in the tent overnight and she did fine.  We didn't put on the rain fly because it was going to be a nice night and we wanted to watch the blue moon.  It was pretty awesome.  You could also see the reflection on the pond from the tent.
﻿ 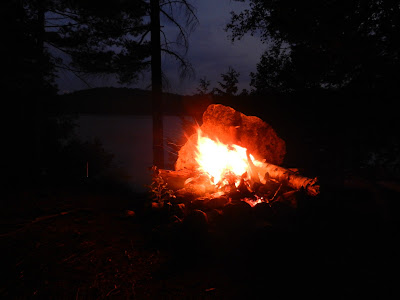 In the morning we went for another boat ride, then broke camp and headed back.  One thing I wanted to try and do, was try to find a Nalgene bottle that I has lost last September while bushwhacking in the area.  We followed last year's route, as best as I could recall, in hopes that I would spot the bottle.  I didn't really expect to find it.  I wasn't on a trail when I lost it. ﻿ 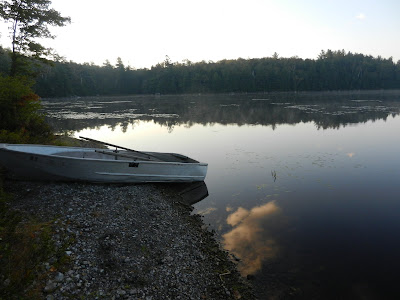 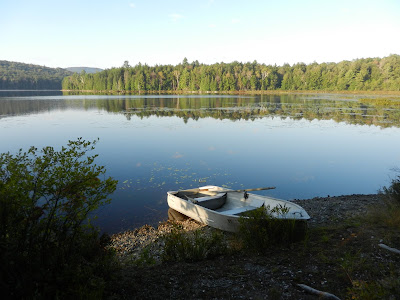 ﻿
Amazingly, I found it.  I got to within about 4-5 feet from it before I saw it.  It had fallen out when I was scampering over a fallen tree.  It really was like finding a needle in a haystack.  I brought the bottle home, and it cleaned up and it looks like new.  When I lost it, all that it contained was water, so there wasn't anything nasty inside.
We finished the bushwhack back to camp.   This trip was about as easy as a backpacking trip can get, but it was also about as nice a trip as anyone could have.﻿
Telemarkmike at 8:28 PM
Share