The Long Trail in Vermont certainly boasts many fine miles of trails and we took Saturday to climb from Lincoln Gap to the summit of Mount Abraham (4006').   Another option is  to climb from the Battell Trail to the west, but we chose to start from the gap.

Starting at gap saves almost 1000' since the Battell trail starts at around 1500' and the Lincoln Gap trail starts at 2424'.  We arrived at the trailhead at about 9:45 and were on the trail by 10.  The trail is relatively flat for awhile before beginning a slow climb to the Battell Shelter.  The shelter is at 3250'.  There is a caretaker at an adjacent tent platform who collects $5/person from those wishing to stay at the lean-to overnight.  There is water available from a nearby stream and there is an outhouse.

We stopped at the shelter to have a snack, then continued on.  Shortly after the lean-to the real climbing begins as the trail climbs 750' in the last .8 miles.

We reached the summit just before noon.  The Battell Shelter caretaker was on the summit providing information to those with questions.  He also had a counter, and was counting the numbers of people reaching the summit.  I was number 28 for the day.  There was a group of young people lounging on the summit enjoying the nice day.

The view from the summit was pretty good.  Early morning clouds had lifted above summit height.  We looked around for a bit, then continued northward to look at the plane that had crashed near  the summit in 1973.  Miraculously, none of the 3 persons in the plane suffered any severe injuries.

The plane is located just north several minutes from the summit.  There is a small rock cairn on the left marking a short heard path to the wreckage.  The plane doesn't look like it has been sitting there almost 40 years.

We journeyed on 1 mile further north to Lincoln Peak where there is a summit platform just above the top of the ski lift.

The clearing provided by the ski trails opens up the views to the east and west.


From Lincoln Peak, we traveled another .5 miles north to Nancy Hanks peak.  There is no view from this summit, but just a 100 yards to the north is a rock ledge affording views to the east.

From Nancy Hanks peak, we returned the way we had come.  We didn't see anyone on the ridge north of Mount Abraham, but there were plenty of people climbing to Abraham from Lincoln Gap and the parking area was full.

We arrived back at the trailhead at 2:30.  It had been a nice afternoon.  The weather had been somewhat cooler than weeks past, with temps in the 70's , but no humidity and a good breeze.  Some of the leaves on the birch trees are beginning to turn yellow and even a couple red maple leafs were found.  Fall is coming! 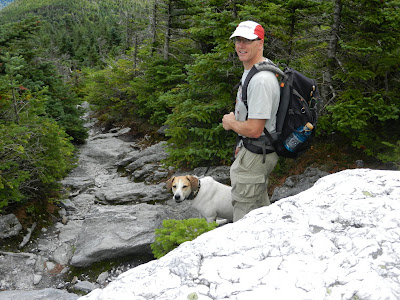 My GPS track from Lincoln Gap to Nancy Hanks Peak