On Saturday, I had the opportunity to re-climb Mount Colden.  It had been many years since I had summited Colden.  In fact, Colden was the 2nd high peak I ever climbed.  It had been a day of pouring rain and fog with no views.

My wife's brother Rob was visiting and was looking for a nice high peak to climb.  He had done Giant and Algonquin the previous weekend.  I suggested Colden as a great loop hike for us both to climb.  My plan was to park at South Meadow and take the old truck road to Marcy Dam, then climb through Avalanche Pass to Lake Colden.  From there we would climb the steep trail from the lake to the summit.  Our descent would be down the east side of Colden to Lake Arnold, then back to Marcy Dam and out.


We parked at South Meadow and were on the trail at 6:30 AM.  We made good time and passed two women along Avalanche Lake.  They were doing the same hike as us.  We saw a group of six filtering water at the Lake Colden crossing.  Later, climbing the steep trail up Colden, we saw a group of 5 or 6 guys.

There were several other groups along way including a young camp group  that we saw at the lower summit. 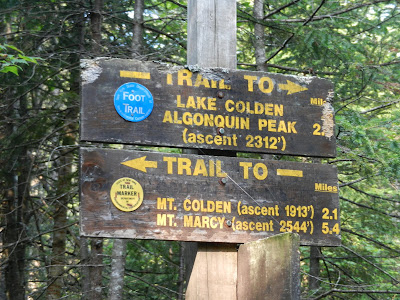 We reached the Lake Colden crossover around 8:30 AM .  Rob took the lead as we climbed the steep trail up Colden.  He had Rev on the leash and they were quickly getting ahead of me.  I picked up my pace  and wondered if I was going to be able to keep up.  About halfway up, I caught up with Rob who was resting along the side of the trail.  He had realized he was hiking too fast and it was time to slow down.  That was OK with me.  We continued on.  I had to lift Rev in two locations.  One spot was a rock that she couldn't leap up, and one ladder near the treeline.

We reached the summit at 10:30 AM.  It looked totally unfamiliar to me, so I enjoyed the view for the first time.  We continued over to the lower false summit where we stopped to have an early lunch.     There was not much breeze, but above the treeline it was enough to cool us down.  It certainly didn't feel like the 90 degrees that it was supposed to reach in the valley.


After lunch we continued on the loop over to Lake Arnold.  We stopped for a snack at Lake Arnold (Rev went for a swim).  From there we headed back towards Marcy Dam and back to South Meadow.  It was the longest hike Rob had been on.  He admitted he was tired, but he also really enjoyed it.  He had grabbed his third high peak.  He is going to keep a record of his ascents, just in case he decides to become a 46er!


We were back to the trailhead about 2:20 PM.   I headed home due to other commitments.  Rob was going to stay in the north country.  Who knows, maybe he climbed another peak on Sunday.  He was considering Cascade and Porter, depending on the weather.

In either case, we both enjoyed Colden on Saturday.  No bug problems.  It was hot in the valley, but a fine day to be up high.

My GPS track of Mount Colden at EveryTrail