This was it.  Sunday was my day.  My day to finish climbing the Adirondack High Peaks.   My day to become an Adirondack 46er!  Why was this such an accomplishment?

46 peaks.  That's it.  No big deal.  How hard could it be?  But then the planning started.  Many of these peaks are 7-8 miles from the nearest trailhead.  That means a lot of 16 mile day trips, or multi-day backpacking trips.  Some traverses can be had, and some loop trips, but it's still a lot of hiking.  Every 46er has tales to tell.  You can't climb these 46 peaks and not have learned a thing or two.  Trial by fire.  You learn to respect mother nature.  You won't always win.  A lot of driving is also necessary.  Especially if you don't live close to the high peaks.

What you will find is friends along the way.  You'll learn how to navigate herd paths, then how to navigate by compass.  Your map reading skills will improve.  Topographic maps will be your friend.  You'll learn from veteran hikers and from beginning hikers.  Animals will play a role in your journey.  So will sun, mud, rain, sleet, snow, ice and bugs.  You'll learn to study maps to see where you can get water.  What to carry, what not to carry.  What to wear, what not to wear.  What to have available in your car.  Don't expect your cell phone to have a signal.  Don't expect help to be around the next corner.  What to expect?  The unexpected.

My quest began in 1989 when I climbed Algonquin and Colden with my dad.  That first trip started at Adirondack Loj.  We hiked up Algonquin on August 16, 1989 and down to Lake Colden and Flowed Lands.  A beautiful day.  We camped in a tent overnight at Flowed Lands.  In the night, it began to rain.  In the morning, we packed up the tent in the rain.  We decided to climb Mount Colden on the way out, thinking that the weather was going to break.  It did not, it poured the whole day.  In October 1990, we climbed Armstrong, Gothics and Sawteeth from the Ausable Club.

I didn't reach another high peak until March 1996 when I skinned up Mount Marcy and skied down with some guys from work.  That was a great trip!  Early Spring temperatures with great ski conditions on New York's highest peak under bluebird skies.  Unfortunately I did not continue my progress on the high peaks again until 2009.  I began tackling a few more and in 2010, Leesa and I moved to Lake George.  The Adirondack Park was now our backyard!

At the beginning of 2012, I had 14 high peak summits to my credit.  I picked up 7 more during the winter season.  In April,  Leesa and I grabbed ﻿Tabletop, Whiteface and Esther.  In May, Mount Marshall and the Dix range were added to our list.  After the Dix range, I decided I wanted to finish this year.  I had no excuse.  I had most weekends free, I had vacation time I had to use and distance was not a problem.   Leesa wasn't driven to climb all the high peaks, but she now has 27.

During June I climbed Cliff, Redfield, Allen, Haystack, Basin, Saddleback, Iroquois and the Santanoni range.  In the first few days of July, I climbed the Seward range and MacNaughton Mountain, the unofficial 47th peak.
All that was left was Gray Peak and Mount Skylight.  Leesa wanted to do the hike with me and we wanted a nice weather day.  Sunday's forecast looked great so plans were made.  She wanted to start early and have a leisurely day.  After all, it was only 16 miles.

We were on the trail at 5:30 AM.  Our itinerary was to take the Van Hoevenberg trail past Marcy Dam to the trail past Lake Arnold to Feldspar Brook.  From there, it was up to the Gray Herd path and Gray Peak.  Back to Gray to Four Corners and up to Mount Skylight.  Back to Four Corners and up to Mount Marcy via Schofield Cobbles.  Leesa had not climbed Mount Marcy previously, and I had not done it in the summer.  From there, we would return via the Van Hoevenberg trail to the Loj.

We both found the Lake Arnold to Feldspar trail to be really interesting and a nice trail.  New foot bridges and lots of recent trail work made the trail very enjoyable.

This was our first visit to Lake Tear of the Clouds (the highest water source for the Hudson River).

Gray Peak has nice views of Marcy and Skylight and distant mountain views as well.  We were on the summit at10:30 AM.  Five hours to get from the ADK Loj to Gray Peak at our leisurely pace.

We descended Gray Peak and continued east past Lake Tear of the Clouds to Four Corners.  At Four Corners we saw a cairn marking what appears to be a herd path heading north (perhaps another way up Gray or Skylight?)  We didn't have any knowledge about where it went.  We took the marked trail south towards Mount Skylight.
It felt strange to be approaching the final high peak.  As we climbed, the partly cloudy skies were becoming blue.  We reached the top at 11:55 AM.  Peak #46 was mine!  We had the summit to ourselves.  Leesa gave me a big hug and congratulated me on my 46er finish.  There was a strong breeze, but it felt great.  We stayed on the summit for 30 minutes and celebrated.  We didn't see anyone else until we had returned to Four Corners and began climbing Mount Marcy. 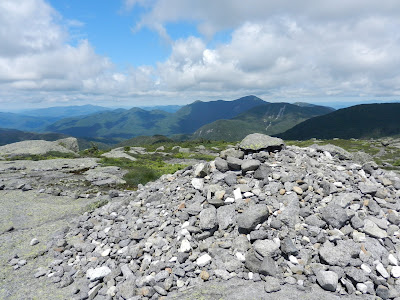 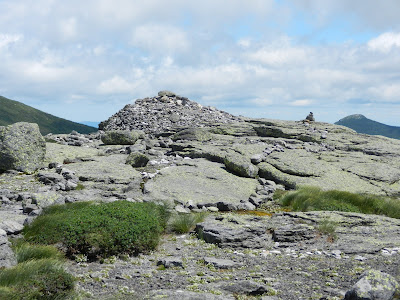 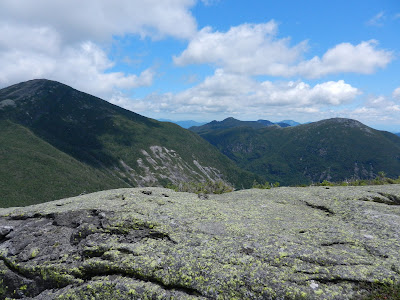 After thoroughly enjoying our time on Mount Skylight we returned to Four Corners and began the climb to Mount Marcy.  The last half of the trail is above treeline and the views are fantastic.  It totally takes your mind off of the exertion of climbing.


We were on the summit of Mount Marcy at 1:30 and stayed until about 2:00 PM.  There were plenty of people on Marcy as expected, but there was room for all.  After more snacks for Rev, we descended the Van Hoevenberg trail as planned back to the ADK Loj.  We reached that car a couple minutes before 6 PM.


With my 46 complete, I'll be looking to hike other trails that I haven't been on before.  I'll be sure to revisit the high peaks.  Perhaps I'll work towards my winter 46.  I have 8 at present.  I've learned a lot along the way and enjoyed every minute.  Hiking is still in my future.  It won't end here.