On Labor Day, Leesa and I were pondering where we wanted to go for an enjoyable hike.  I thought about Buck and Bear Mountains in the Dix Wilderness.  I described the hike to Leesa and she said perfect, let's do it.  Last time I went, it was on the verge of winter and it was a blustery cold day with a little snow up high.  This time, it was still blustery, but it felt nice on such a warm day.

Perhaps the easiest way to access these two is via the West Mill Brook access.  We had our jeep with us and we were easily able to drive in the 1.1 miles to the gate.  The water depth at the Schroon River crossing was only a couple inches deep.

After we got started, we only walked on the West Mill Brook woods road for less than a half mile before we exited the trail on the right.  Rather than climb in the draw to a col, we sidestepped the unnamed hill to the southeast of Buck.  It has quite a stone face (as seen in the picture below.

The woods throughout most of this entire area is light density for the most part and moderate density at worst, mingled with slabs of rock.


We poked around and climbed steadily towards Buck Mountain watching Rev zig and zag towards things that caught the interest of her nose.  When we topped out on Buck, Leesa was quite impressed with the view of the Dix Range, Giant & Rocky Peak as well as lower peaks in the area.

Leesa was game for more so after some time on Buck, we continued on to Bear Mountain.

We got to Bear and it wasn't quite as open as I remembered it, but still a nice peak.  I gazed at the "igloo", the stone wart on the east side of Wyman, but we didn't head that direction on this day.  Leesa was content with our 2 peaks so we meandered about before dropping off Bear to return to the West Mill Brook woods road. 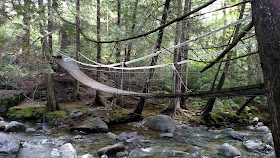 We made a short stop at a watering hole.  It was too cold to swim, but we stuck our feet in.