My last (and only) visit to Peaked Mountain in the Siamese Ponds Wilderness was on 2/20/12 with plenty of snow on the ground.  This trip gave me a chance to see the area in the summer time, plus tack on a bushwhack to neighboring Slide Mountain; a mountain that I had not visited previously.

It wasn't going to be a long hike.  I waited out the morning rain and got to the trailhead at 1 PM with clearing skies.  It was going to be a nice afternoon.  My dog Rev was my only companion for this one.  The parking lot was 2/3rd's full, mostly with boaters and campers.  There were still empty campsites available right on the water, but of course the weather was just clearing.

It was a quick 0.9 miles south on the trail along the west side of Thirteenth Lake (passing two designated campsites) before the trail turned west and I began to climb, following Peaked Mountain brook.  This brook is quite nice and there are many inviting spots to stop and stick your feet in the water or take a snack break.

The trail crosses Peaked Mountain brook a couple times before arriving at Peaked Mountain Pond after 2.5 miles.  There is a nice designated campsite at the water's edge on the east shore.  There was also an aluminum canoe and paddle (marginal seaworthiness). 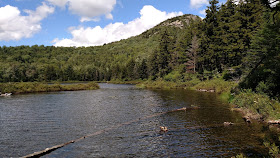 The last 0.5 miles or so is steep, but it's a short jaunt to the top of Peaked Mountain.  When I climbed in the winter, the last 0.2 miles was quite icy.  This time it was just steep, but the trail was in good condition.  The summit offers nice views in several directions.


After leaving the summit, I backtracked halfway down to the pond, the contoured over to Slide Mountain, bushwhacking though light to moderate woods.  I picked up the southern approach ridge and made my way up to the top.  It wasn't as open as I had hoped, but a few viewpoints opened up. There were no views from the actual summit highpoint. 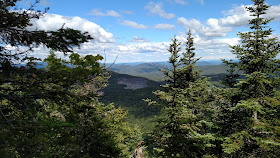 From Slide Mountain I went almost straight south to return to the Peaked Mountain trail for my exit.