Saturday May 20th was the 125th Anniversary of the Adirondack Park.  With a great weather forecast, my dog Rev and I headed for Upper Works to climb Mount Skylight.  I hadn't been there in a few years and it's one of my favorite high peaks.

I got an an 8 AM start and was at the Herbert Brook lean-to at 10.  Four sleeping bags and gear were laid out, but the occupants were no doubt climbing peaks in the area.  I put on Rev's RuffWear harness with the carry handle and carried her down the ladder to the bridge at the Lake Colden outlet. We headed for the suspension bridge over the Opalescent and began climbing towards the Uphill lean-to.

It was 45 degrees at the start and there were no black flies all day.  I was comfortable hiking in a tee shirt and lightweight hiking pants.

Although is was the Victoria Day Canadian holiday weekend, I saw less people than I thought I'd see. At the 3 hour mark I passed the Uphill Lean-to.  No signs of life there.  I went past the Feldspar lean-to and began climbing the Feldspar Brook Trail towards Lake Tear of the Clouds.  I began to see little pieces of snow spine; remnants of the compressed trail from a winter of snowshoe hikers.


As I reached Lake Tear of the Clouds, and began to skirt around it to get to 4 corners,the spine spine became consistent and it was about 2 foot high.  I some places I could walk around it, but most places I could not.  Fortunately, the spine was strong enough that I didn't break through that often.


At 4 Corners it is 0.5 miles to the top of Skylight.  Now it was an uphill climb on the snow spine. Still manageable, but I was thinking that coming downhill would be worse.

As I reached tree line, the snow soon disappeared to to the exposure to the sun.  I reached the summit at 12:30 and I had the peak to myself!  In the distance, I could see at least 20 people standing on the summit of Mount Marcy.  I was glad to be on Skylight.  Rev and I sat down out of the wind and had lunch. 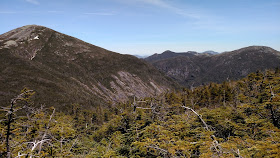 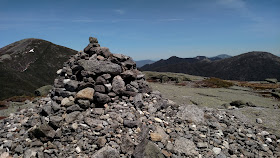 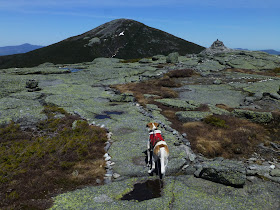 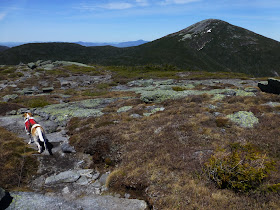 Going down the snow spine from Skylight wasn't bad if you went slow and didn't try to rush it.

It was still early afternoon so I decided to tack on Gray Peak.  The herd path up Gray didn't have as much snow since it faces south.

After Gray, it was take to long the long 9 miles trek back the way I had come.  I began to see more people moving about.  Most of the were backpackers camping in the vicinity of Lake Colden and Flowed Lands.  It would have been nice to do the same and wake up Sunday Morning to do more climbing, but it was just a day trip for me.

Including my stops it was an 11 hour day, but well worth it.  Happy 125th to the Adirondack Park!