Moreau Lake State Park is one of the most popular parks in the State of New York.   It is convenient to the Capital District and lies right off I-87, exit 17.  Many people enjoy the lake and the campground but it also has a vast trail system the covers some rugged terrain.

We had a few hours free on Saturday and we chose to snowshoe the Western Ridge trail, starting on Spiers Falls Road.  The summer parking lot was not plowed, but there was a nearby pulloff on the road where we were able to park.

There were no recent tracks at the entrance to the trail.  We broke trail, but it wasn't difficult with only 6 inches or so of snow on the ground.  Snowshoes weren't really necessary, but we chose to wear them anyway.

The Western Ridge Trail is the yellow trail on the park map and is marked with yellow discs.  The trail offers many viewpoints of the Hudson River, the hydroelectric dam and points north and west. 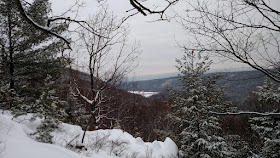 Once we reached the orange trail we ran into a pair of fresh snowshoes tracks.  They followed the yellow trail for a bit, then turned off on the red trail.  We eventually ran into a lone snowshoer heading the opposite way from us on the yellow trail. 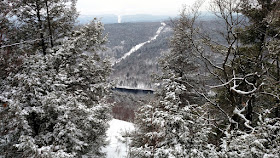 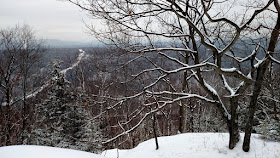 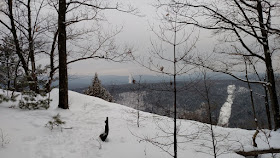 Near the end of the trail we chose to bushwhack through the woods a bit on the return, as opposed to following our tracks back.   Later we went to the Moreau Lake State Park trails on the north side of the Hudson River and cross country skied from Hawk Road south to the hydroelectric dam and back on the maintenance road. 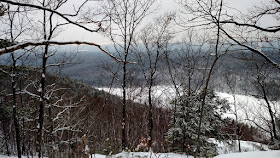