If you are lucky enough to have the weather cooperate during a winter hike in the mountains, you can have a jaw-dropping beautiful day.  Today turned out to be one of those days although I couldn't have predicted it if I tried.

Dan Stec and I had plans to meet at the trailhead at 1 PM to hike Loon Lake Mountain.  This mountain is about 30 minutes north of Saranac Lake.  Dan had climbed it before in the summer months, but I had never been there.

It turned out to be about 1:45 before we were on the trail, but it's a short hike so we weren't concerned. It had snowed a little on the way up and it was overcast when we started hiking.  I wasn't expecting to have any views, sun or blue sky.

My dog Rev was with us and she set the early pace, expecting us to keep up.  Of course she soon learned that we could not (she should know this by now).  To her credit, she did patiently wait now and again, or come bounding back to check on us.

It appeared to us that a recent snowfall (yesterday perhaps) hit the top half of the mountain, but the bottom half  did not.  While the lower woods were blanketed with nice fluffy snow, there was no snow in the trees.  That all changed in the last half of the hike as we began to climb.

Four groups of hikers had signed in ahead of us and they all wore snowshoes.  The trail was softly compacted and was now perfect for snowshoeing with no trail breaking required.


The first part of the trail mostly follows an old woods road and we moved quickly.


At about half the distance to the summit, we began to see snow clinging to the hardwood forest.  The grade abruptly changed with one mile left; becoming markedly steeper.  Conifers appeared, heavily laden with snow.  Since Dan is much taller than I, he had the added challenge of needing to duck under many snowy limbs that I didn't have to think about.

Partly up the steep final mile, the sun began to poke us through the tree limbs now and then.  All of the sudden, bluebird skies opened up!  It was rather incredible how quickly the transition occurred. The folks who we saw heading down said it was just starting to clear a little when they were on the summit.  They didn't sound to optimistic that we'd see more than they did.

I've included more pictures in this post than I normally do because so many of the summit pictures came out good. 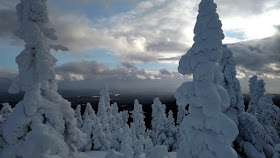 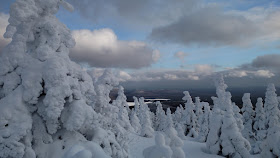 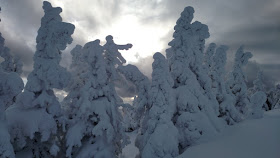 It was a little chilly at the summit, although the wind wasn't bad.  We didn't linger since it was already 4 PM.  The downhill gave us some nice butt slide opportunities in the beginning. 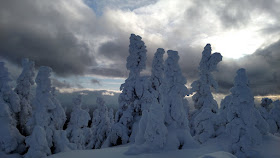 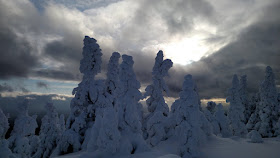 It took us about 2 hours up and an hour and 15 minutes to come down.  We got to the cars at 5:15 and had enough daylight to start our drive out.  Thanks Dan for the great company and thank you weather gods for giving us the perfect weather at just the right moment.