This year, as always on Columbus Day, we headed for the hills.  The quiet hills were what we were after.  All the high peaks and all the popular trails would be crawling with people.  We were hoping for a sunny day and a chance to catch the peak of the fall life season in the north country on a quiet peak with views.  Knob Lock Mountain came to my mind.

Knob Lock (also known as Elizabethtown #1) is  a fine peak with a fantastic rock summit and it is relatively unknown.  There is no trail or even well defined herd path to the summit.  I had visited this place on 2/1/14 on a cloudy day with snow squalls.  I had done that trip alone with my dog Rev.

This time, Leesa and Rev were both going with me and we parked at the Owl Head Lookout/Giant Mountain parking lot and only one other car was there at 8:15 in the morning.


We took off on the trail towards Owl Head Lookout (a wonderful destination on it's own) but after a half mile or so we veered off the trail to the right to locate the eastern spine of Knob Lock.  It's not hard to locate.  We were climbing the ridge after 0.4 miles from leaving the trail.

I brought Leesa on this bushwhack because my recollection was that the woods were not that dense. It turned out to be a little thicker than she would have liked.  I thought the bushwhack was through  moderately dense growth at the worst, but she thought it was thick.  I told her that if it was too thick for her taste, we would turn back.  She pressed on.  It did alternate between moderately thick and open rock.  That probably helped her.

We had an early view of Owl Head Lookout and soon we could see the Elizabethtown valley down below.

I forgot my camera so the pictures here are from my cell phone.  It was a bit overcast and the phone didn't pick up the color too well.  The colors were more impressive than the pictures indicate.


Leesa appreciated the views that appeared often as we climbed higher.   The best part of all was the open summit we had to ourselves!  I expected as much, but it's always nice to find.  We looked across the valley to Hurricane Mountain and we could see at least 30 cars parked on the north side of the road at the trailhead.  There were probably more parked on the south side.  Who knows; there may have been a hundred people on Hurricane.  We had a summit almost as nice to ourselves.   It was an extremely busy holiday hiking weekend, but our plan paid off.  I will take a bushwhack over a trail any day for the solitude that is awarded and for the exploration that a bushwhack provides.

It was a little windy and chilly on the summit so we didn't stay quite as long as we might have otherwise.  We did enjoy a lunch in a sheltered spot out of the wind before heading back.  We swung a little further northward to avoid a dense area in the col prior to the summit.  We were successful, but then we reclimbed to the ridge to enjoy the views again on the way down. 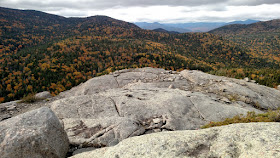 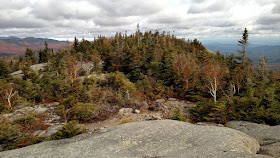 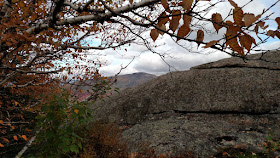 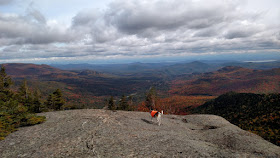 When we regained the trail, we saw 3 groups of hikers just in the short distance back to the car.  Upon reaching the parking lot, we found an overflowing lot with cars parked out on the shoulder of Route 9N.  Most the these hikers were probably hiking to Owl Head Lookout, with a view others headed to High Bank or Giant Mountain.  Driving home on Route 73 we were amazed the the overflowing parking lots everywhere.  It just confirmed for us that we made the right hiking decision on this day. We were content!