Sometimes I do a hike and then revisit the same area to bring Leesa so she can see it also.  We just did that with Bald Mountain in Warrensburg.  This time it was to Number Seven Mountain and Ferguson Brook.

This time I started from the south at the gate where Gay Road Road meets the Hudson River.  This was my 2nd adventure of the day after hiking in the Lake Geroge/Lake Luzerne area in the morning.  Our start time was about 2 PM.

We followed the woods road beside the Hudson River until it was time to veer into the woods to begin the bushwhack to the southern approach to Number Seven.  The final approach up the SW flank is amazing and it reminds me of the similar SW approach to Number Eight Hill in the Pharaoh Lake Wilderness Area.  Look at the pictures below and you be the judge.

We gained the ridge at the mostly flat plateau just south of the final approach.  This area was just acquired by New York State and is known as the Huckberry Mountain Forest.  If you pass through this area you will notice a maze of old logging roads. There are also still posted signed from the Number 7 Hunting Club. 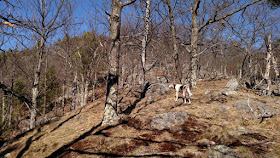 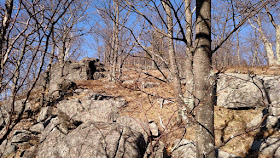 From the summit, we continued north until we could drop down the west face back to the river.

At the confluence of Ferguson Brook with the Hudson River, we quickly climbed along the north side of the brook to take a look at the cascades, water slides and falls.  It was almost 6 PM so we didn't have time to linger.


We returned via the river and walked out in the setting sun.