One hike often leads to another for me.  Back in May, I had climbed Peaked Hills in the Hoffman Notch Wilderness.  From the summit of the northern Peaked Hill, I could see an attractive open rock summit to the north.  I looked at my map and determined that it was the unnamed summit just north of Squaw Mountain and just south of Palmer Pond.  As usual, I made a mental note to add it to my list for future exploration.

Fast forward 2 months and the day had come.  As luck would have it, I had just read an account of a trip to this summit by Spencer Morrissey on the Schroon Lake Region blog.  That jogged my memory and now it was my turn.  Spencer had named it Palmer Pond Mountain, so I'll use that name as well.

I chose a shorter route than Spencer; my route started with the route described by Tom Dubois in his book "Life Under the Fast Lane - A Bushwhacker's Guide to Northway Access Routes, Exit 28 to 31".

My goal was to cross the Northway at culvert # 3; the Wyman Hill culvert in Tom's book, then bushwhack NW to the summit. To access culvert # 3, you take Route 9 to the Schroon Lake/North Hudson town line.  There is an attractive welcome to North Hudson sign at the location.  A log home is on the east side of Route 9, and a woods road is on the west side.  The woods road leads to the Schroon River on public access land owned by the Town of North Hudson.

I parked a couple hundred feet in on the woods road, although high clearance vehicles can drive all the way in.   Deer Flies were swarming the car as I parked.  I was ready for this.  I was wearing pants and a long sleeve shirt and I put my head net on before I even got out of the car.  I let Rev out of the hatch and off we went.

The woods road walk was pleasant and led slightly downhill to a sharp 90 degree bend to the right after 0.75 miles. At this location a faint herd path leads straight ahead a short distance to the Schroon River.  At this location, you can see a drainage entering the Schroon from the opposite side.

The Schroon can be crossed just 50 downstread from the mouth of the drainage during times when the water level is low.  On the day, the Schroon was flowing at knee level at the deepest point.  I had brought water shoes and stopped to put them on.  Rev and I crossed without issue.  I left my water shoes by the river to use later for the return trip.  Next we followed the drainage, staying on the south side of the drainage as we approached the Northway (I87) at the one mile mark.  There is a water culvert for the drainage, but just south of the water culvert is a walking culvert.  We used the walking culvert (the named Wyman Hill culvert) to gain access to the west side of the Northway.

Once on the west side of the Northway, we crossed the drainage to head NW towards the unnamed "Palmer Pond Mountain" hill, following the path of least resistance.  I generally hugged the left (south) side of the ridge as we climbed.  The woods were open and there were pretty stands of red pine.  It didn't take long to get views to the south.


It was warm and humid and soon my shirt was soaked from sweat.  The bugs had mostly disappeared and I removed my headnet as I climbed.  There was an early steep section that took us up to the ridge, then moderate climbing until a second steep section prior to a false summit.

From the false summit to the true summit, the woods were thickly but still not bad.  At 2.6 miles from the car we topped out on the true summit.  Rock cairns dotted the summit and nearby ledges. From the summit, the only views are facing east and south, but just west of the true summit is a fantastic set of ledges and rock where you can see south, west and north.

I really enjoyed this spot and I actually stayed on the summit for an hour.  First I ate lunch and fed Rev, then I laid down on the warm rack and let the sun and breeze work to dry my wet shirt.  I closed my eyes and it felt like I was at the ocean.  The wind substituted for the waves, but it was very relaxing.

From this spot, I could see the Blue Ridge Road winding westward, the Adirondack Buffalo Company, and the High Peaks beyond. 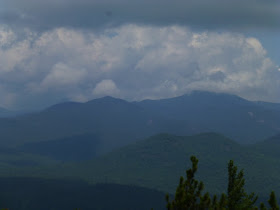 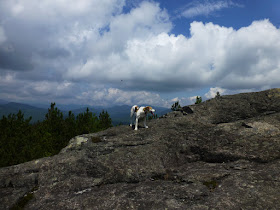 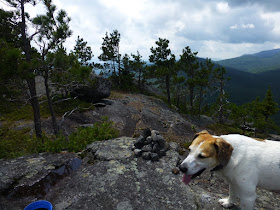 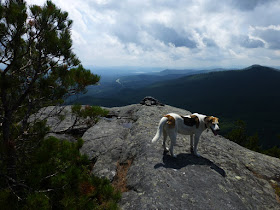 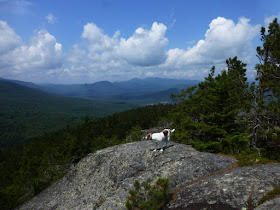 I could have stayed on this summit all day but I had to be home by 3 and it was now 1:15.  Alas, down I went, pretty much backtracking the way I had come.  Leesa missed out on this trip, but I have the feeling I'll come back here with her in the fall to take another look.  Using this route, it took me 2 hours to climb and an hour and 25 minutes to descend.  A great half day bushwhack to say the least.